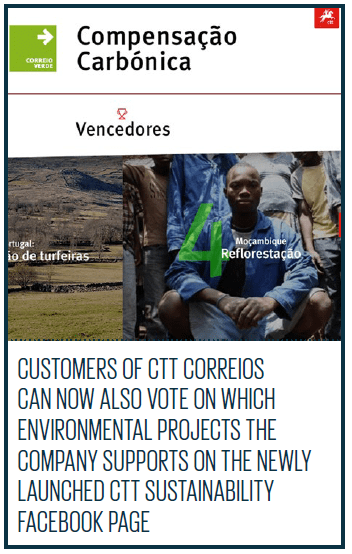 Customers of Portugal’s CTT Correios have been able to choose a greener delivery service since 2010. But now they can also have their say on which environmental projects the company supports.
CTT’s Correio Verde (Green Mail) includes carbon offsetting as a cost-free, standard feature. Since its launch Correio Verde’s carbon emissions have been compensated through offsetting projects chosen by CTT. This year’s process involved whittling down 21 prospective projects on the basis of type of offsetting, geography, certification credentials, costs, social and environmental benefits, before CTT put forward four finalists for voting on social media. The vote was the opening event of “Esfera CTT”, the newly-launched Facebook page on Sustainability of CTT (www.facebook.com/EsferaCTT).

By opening the decision-making process to the public, CTT’s aim was to deepen stakeholder engagement, especially with the elusive digital generation, and to improve transparency around project selection. CTT also wanted to create product differentiation by using carbon brokers’ logos on Correio Verde envelopes and packages, and established a launch pad to expand the participative carbon approach to other products and services.
The project attracted over 39,000 registered users, of which 13% were from overseas, and 1,200 online voters. As the first carbon participative offsetting process in Portugal, it also attracted the attention of the press, TV channels – including one of the most popular morning programs in the country – and social media.

The visibility of the project also helped drive increased revenues: CTT’s eco-portfolio recorded its biggest ever increase in the first half of 2015, with Correio Verde volumes growing by 24% and Direct Mail Eco reporting a 34% rise.