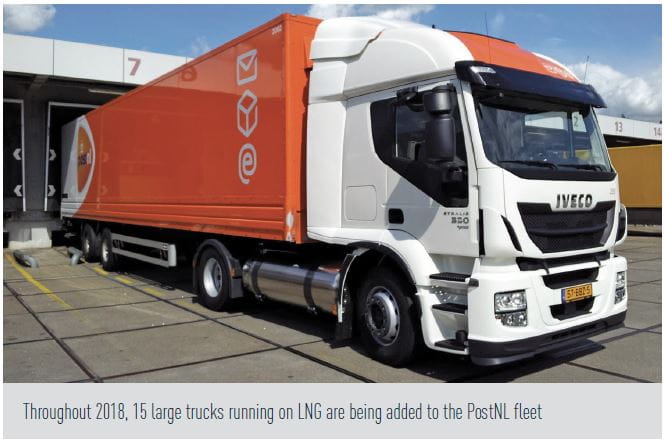 With growing e-commerce, PostNL is always looking for ways to further reduce emissions from its sizeable vehicle fleet. While the fleet already includes several hundred biogas and e-cargo bikes, PostNL plans to further diversify its alternative fuel vehicle fleet by replacing 15 large trucks (> 7.5 tonnes) for ones that run on Liquid Natural Gas (LNG) in 2018.

Currently, PostNL relies on a large fleet of trucks that use 7.5m litres of diesel a year causing 20,000 tonnes of C02 emissions. It is anticipated that these newer LNG vehicles will lower carbon emissions by 10%. The trucks will also emit levels of PM10 and nitrous oxides (NOx) well below current European standards, thereby significantly improving air quality.

On top of the environmental benefits, the LNG engine is much quieter and will provide a significant reduction in noise, improving the quality of life in urban environments. Also, the new fleet will have a smaller operating cost than their diesel counterparts.

In the future, PostNL plan to further expand their fleet of alternative fuel trucks with more LNG and bio-LNG vehicles. The aim will be to reduce C02 emissions by 50% compared to their diesel counterparts.