Though Land Rover owners purchased a new vehicle every 2.5 to 5 years, there had been no strategy for communicating directly with existing owners.

Land Rover knew many of their drivers were ready to move to another car brand. They had either had a bad experience with the Land Rover they owned or they had moved into a new lifestyle and weren’t aware that there was a Land Rover to meet their new needs. The challenge was to make them aware of the wide range of vehicles in Land Rover’s portfolio.

Research and data showed that the customer journey took three months from consideration to purchase of a Land Rover. So a data-driven, multi-touch, rolling communication campaign was created, which spoke to owners across a 90-day period in three distinct stages.

Phase one focused on re-invigorating owner feelings for the brand, reminding them what Land Rover stood for and connecting them to the brand spirit. Phase two was more rational, showcasing new innovations and refinements to the range. The last phase focused on transaction and, as the prospects got ever closer to commitment, reinforced the benefits of buying a new vehicle.

Each stage started with direct mail but included email and a comprehensive website with three online videos shot for the campaign. Owners received communications featuring the 2015 model of their existing vehicle with the exception of those who owned Land Rover’s entry-level vehicle, LR2, who were encouraged to trade up to a superior model.

The first measure of response was through the initial direct mail piece’s webkey. The 4.66% usage rate was more than double the anticipated usage across 40 states. Results indicated a very engaged audience. Past effective rates in 2014 ranged from 10.86% to 28.46%. In 2015, response rates were 31.99%. Finally, as far as sales were concerned, first wave results were amazing with $24,240,000 in sales for an investment of less than $60,000. 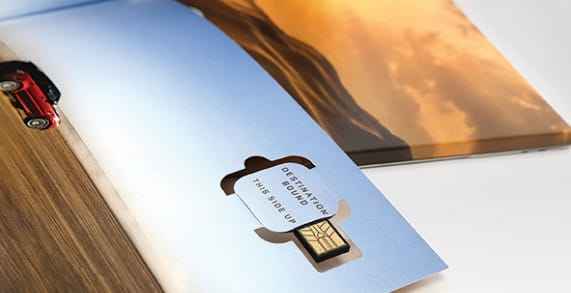