Hodd Barnes and Dickins (HBD), established in 1903, is one of the oldest independent opticians serving the professional community in the City of London. As they are based in the City of London, a large section of their client database are people who work close to their practice. Therefore, if they move jobs they tend not to come back to the practice. HBD wanted to target lapsed clients who had not visited the practice since 2012 and to engage them with an enticing offer so they could revisit the practice.

The objectives of the campaign were to:

A campaign for HBD was created consisting of a personalised direct mailer with a PURL, an interactive personalised micro-site: “YourEyesMatterAtHBD.com” and personalised emails to follow up. The target audience of 1,500 lapsed clients was segmented into four different groups: Male Under 40, Female Under 40, Male Over 40 and Female Over 40. Each of the four target groups had different messaging on the direct mail piece, the personalised web site and the emails that were sent. The incentive to go online using the pURL was a £50 voucher which they could redeem at their next visit to the practice.

The mailer was an A5 postcard which was sent out in a brightly coloured envelope to increase the chances of being opened. The postcard had imagery and copy that was relevant to one of the four target groups and it also had a PURL inviting the recipient to a personalised landing page.

The welcome landing page featured a video describing HBD’s eye care services. The next web page showed a form asking recipients some questions about any problems they were experiencing with their eyesight and if they had any hobbies that might need specific eyewear (e.g. skiing, golf, swimming, etc). The third step asked to re-confirm their contact details in case these had changed since the last time they had visited the practice. After they completed the two forms, a Thank You page was displayed with a link to HBD’s static website and the voucher was emailed to them.

For the customers who responded to the mailer, the HBD staff at the practice followed up with a phone call to book the client into an eye exam. Those people who did not visit the landing page received an email reminder a few days after the mailshot and a follow-up email three weeks later reminding them of the voucher offer.

The following results were achieved:

HBD reported revenue of over £20,000 from the first sales as a direct result of the campaign. This represents an initial ROI of 500% (the target ROI being 200%). The ROI will be even higher when taking into account the lifetime value of the clients. 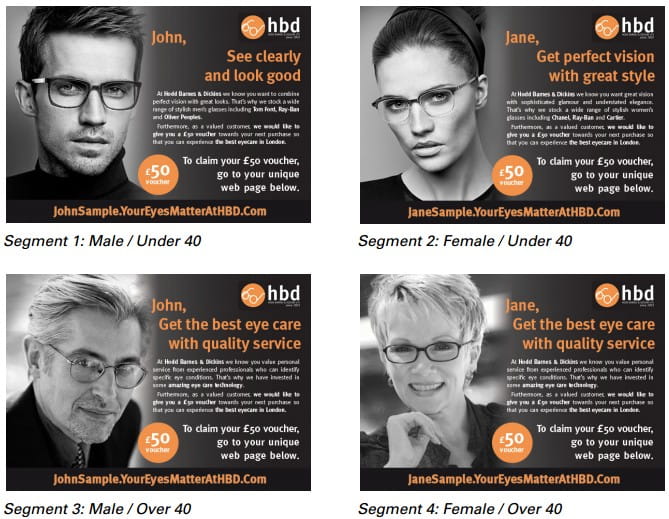