The Quarterly Business Review is published by the Direct Marketing Association (DMA), with research and analysis provided by Winterberry Group. Its conclusions are based on results from an online survey of DMA members, deployed in January 2016.

Despite the challenging outlook for the US economy in general, nearly three quarters (72.9%) of all Quarterly Business Review (QBR) panellists said they remain confident in “data-driven” marketing (DDM) and its prospects for growth. The panellists, including marketers (60%) and marketing services/tech suppliers (40%), said that an economic downturn would force their organisations to examine investment and focus on cost-efficiency wherever possible.

DDM spending to rise for the second year in a row

In Q4 of 2015, the pace of DDM expenditure growth remained on par with that of the previous period. On a 1-to-5 scale (with 5 indicating spending increased “significantly” compared to the previous quarter) panellists indicated their DDM expenditure growth at 3.26 during Q4, the same score assigned in Q3. Overall, this brought the average growth rate for DDM spending up to 3.26 for 2015, higher than 2014’s average growth rate (3.19).

DDM practitioners expected spending to rise in the first few months of 2016; 43.5% of panellists predicted their DDM investments will increase during the first quarter of 2016 while 40.7% said their DDM expenditures were likely to remain unchanged. 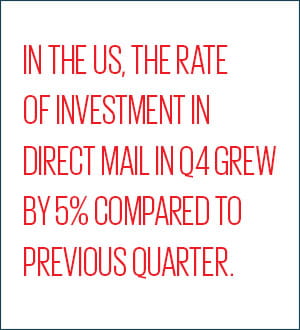 Though digital approaches have been capturing most new DDM budgets—as well as growing mindshare—for several years, practitioners increased their spending on direct mail sharply in the final months of 2015—reporting the first aggregate quarterly growth in more than two years.

In the US, the rate of investment in direct mail in Q4 grew by 5% compared to previous quarter. In addition to direct mail, DDM practitioners continued growing investments in most digital channels throughout the 2015 holiday season; personalised website content again captured the most new spending (indexing at 3.52 on the same 1-to-5 scale), followed by social media (3.44), search (3.44) and email (3.42).

DDM creates 1m jobs in the US

According to The Value of Data 2015, a study commissioned by DMA, the Data-Driven Marketing Economy (DDME) added $202 billion in revenue to the economy in 2014 (up 35% from 2012) – and data-driven firms employed 966,000 professionals (up 49% over 2012). DDME is defined as the economy of firms that exist to help US companies use individual-level consumer data (ILCD) to support marketers as they “go to market,” designing and implementing strategies to generate, fulfil and grow demand for their goods and services.

Potentially reflecting insecurity about the general economy and increased focus on lifetime value of customers, fewer DDM practitioners said they will focus on new customer acquisition in the coming months (62.7% vs 72.2% in the previous year). More than any other business initiative, 65.8% of panellists said they will focus on customer retention and relationship management in 2016.

Source: The Quarterly Business Review is published by the Direct Marketing Association (DMA), with research and analysis provided by Winterberry Group, a New York-based strategic consulting firm serving the advertising, marketing services, media and information industries. Its conclusions are based on results from an online survey of DMA members, deployed in January 2016. Q4 QBR survey data is comprised of the responses of 467 survey respondents, including 282 marketers and 185 marketing services (including agency services) and technology providers.