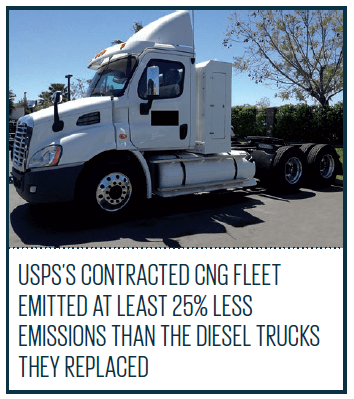 The United States Postal Service (USPS) continues to work collaboratively with over 7,500 suppliers to expand the use of alternative fuels in its contract fleet. In 2014, 39 USPS contract trucks were operating with compressed natural gas (CNG), accounting for a total of 4.8m annual km (3m annual miles) and 1,976,000 annual litres (522,000 annual gallons) of fuel. By 2015, USPS had increased the number of its contract natural gas trucks from 39 to 72, more than doubling the number of annual km operated by natural gas vehicles from 4.8m km (3m miles) to 10.6m km (6.6m miles).

By December 2016, USPS estimates that it will have approximately 140 contracted trucks running on alternative fuel. The USPS is in the process of developing long term goals for this alternative fuel initiative. Additionally, USPS is continuing to engage with its supply base to further encourage and promote the use of alternative fuels in its contracted fleet.

It is estimated that USPS’s contracted CNG fleet has now displaced over 4.5m litres (1.2m gallons) of diesel fuel and emitted at least 25% less emissions than the diesel trucks they replaced. CNG has proven itself to be advantageous in both fuel cost and service reliability, and continues to gain popularity amongst USPS vehicle contractors.