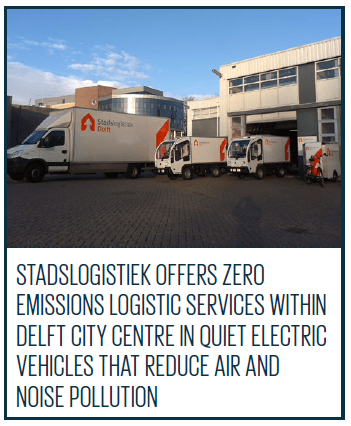 After a year of preparation, PostNL launched a low-emissions logistics pilot project in the Dutch city of Delft at the beginning of 2015. The project is operated through Stadslogistiek (City Logistics), an independent subsidiary of PostNL.

The new service sees parcels and freight addressed to businesses and homes in the city centre dropped off at PostNL’s distribution centre on the edge of town before being consolidated and delivered over the last mile in cleaner, quieter electric vehicles that reduce air and noise pollution. The same process works in reverse for parcels, freight and waste (like packaging material) transported out of the city. Stadslogistiek offers zero-emissions logistic services within the city centre for retailers and consumers.

Laurens Tuinhout, director of Stadslogistiek, says the project is a response to the rapidly changing logistical needs of customers as well as growing environmental awareness: “E-Commerce is growing rapidly, and businesses and consumers are sending and receiving more and more parcels every year.”

The project was initially set up as a collaboration between the City of Delft and PostNL. However, Stadslogistiek aims to work closely with a range of partners and stakeholders, including business and consumers, local councils, interest groups and educational institutions, to spread the benefits to cities right across the Netherlands. In the future, the aim is to expand the range of services offered for parcels, pallets and roll containers, including same-day and time-bound delivery throughout the country.