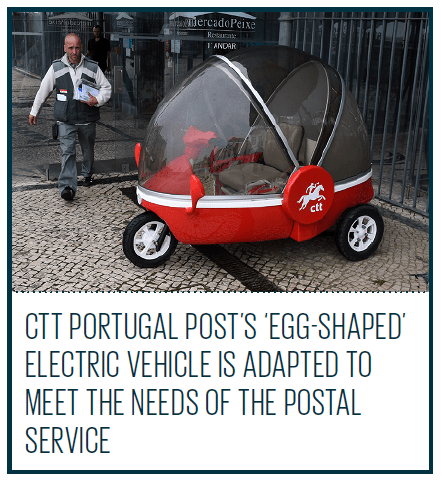 As part of its ambition to cement itself as one of the country’s most sustainable brands, in July 2017 CTT Portugal Post road-tested the first of a new type of electric vehicle that it hopes to introduce into its already impressive 323-strong ‘green’ delivery fleet.

The pilot project has been rolled out in the northern city of Aveiro, which will be the first location to see postal deliveries arrive in what CTT Portugal Post describes as a distinctive, ‘avant-garde’ and ‘egg-shaped’ electric vehicle.

Produced by UOU mobility, a Portuguese start-up based in the town of São João da Madeira, the electric vehicle has been specially adapted to meet the needs of the postal service. It can carry an estimated 75 kg of deliveries and cover approximately 45 km, a distance equivalent to 230 stops during a standard delivery round.

CTT Portugal Post has announced that the pilot scheme will run throughout the summer of 2017, during which time the pilot vehicle will be closely monitored to evaluate its efficiency as well electricity consumption.

If deemed successful, the introduction of a new set of electric vehicles into its delivery fleet will help the postal service continue to trim its annual CO2 emissions, which have already been reduced by 75% between 2008 and 2016.