An Post deploying electric vehicles to drive down emissions 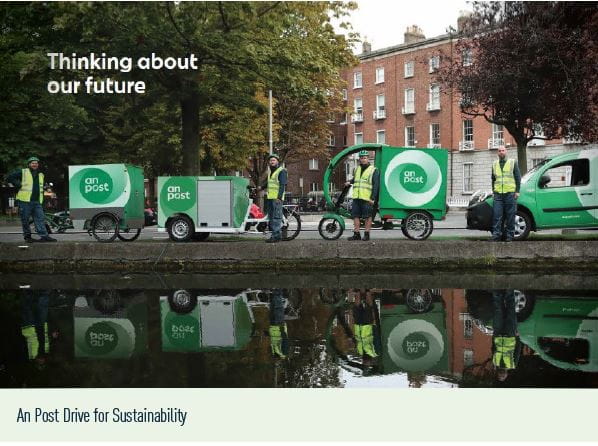 As part of its goal to reduce its carbon emissions, An Post plans to extend the use of electric vehicles in its fleet. The Irish operator is in the process of replacing all its diesel vehicles in the six major Irish cities (Dublin, Kilkenny, Waterford, Cork, Limerick and Galway) with electric vehicles; effectively delivering zero emission parcel delivery and e-commerce services.

An Post have set itself the goal to be the greenest postal service in Europe by 2030 and is the first postal service worldwide to achieve ISO50001 certification for its entire operations. It currently delivers 2m items of mail using a road fleet of circa 2,800 vehicles and 1,600 bicycles, and over the next four years will replace 750 diesel vehicles with electric vehicles.

The electric vehicles that have already entered service have realised savings of 12.2 kg CO2e per 100km travelled and 25.2 kg CO2e per 100km after investment in renewable electricity. The 220 vehicles needed to deliver zero emissions in all Irish cities will save 1.13 GWh of energy per annum at an average of 10,000 km per vehicle, and avoid emissions equivalent to 554,400 kg CO2e after in renewable electricity. Alongside the reduction in CO2 emissions, electric vehicles also reduce pollution and noise, while lower service and maintenance costs (including oil, tyres, brakes) reduce costs and payback time to fleet operations.