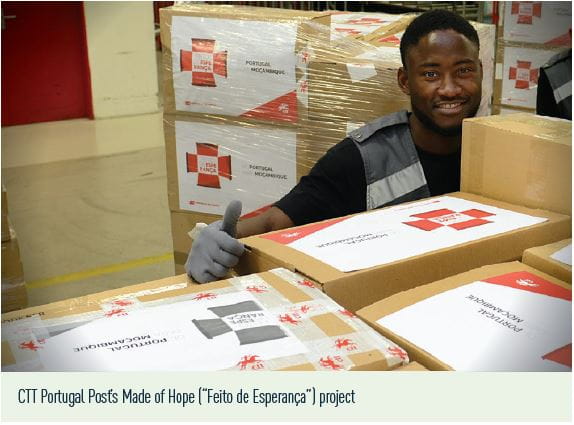 Following the devastating impacts of Cyclone Idai in Mozambique, CTT Portugal Post quickly launched its “Made of Hope” (‘Feito de Esperança’) donation project to provide assistance to those most in need. The initiative reflects the longstanding and deep relationship between Portugal and Mozambique.

CTT Portugal Post has an existing “Add to Divide” programme, an employee-orientated scheme that has operated since 2017. The scheme collects donations from employees which are subsequently distributed among various charitable bodies. After Cyclone Idai hit Mozambique in March 2019, CTT Portugal Post’s subsidiary in Mozambique, CORRE, requested aid from its parent company. CTT Portugal Post volunteers sorted donations collected from the workforce and selected those that specifically met the immediate needs of the Mozambique population such as clothing, household linen and shoes. These items were immediately air-freighted to Mozambique.

As part of the “Made of Hope” initiative, over 200,000 cardboard boxes were distributed to every post office in Portugal to collect donations from the public. Within 24 hours these boxes were filled, and over 70 tonnes of donations were collected and shipped to Mozambique at CTT Portugal Post’s expense. The Mozambique Ambassador publicly expressed his gratitude and praised CTT Portugal Post for its rapid response.