We applaud the group’s impressive achievements in reducing carbon emissions over the past ten years. Since 2008, participants have reduced collective scope 1 and 2 emissions from 8,758,000 tonnes to 6,426,000 tonnes in 2018, an impressive 27% reduction since the start of the programme (see Figure 3). This equates to aggregated savings of more than 17.1 m tonnes of carbon emissions since 2008, equivalent to the CO2 emissions from over 2m homes’ energy use in 20175. Thanks to their collective achievements, the group reached the 20% absolute Scope 1 and 2 emissions reduction target in 2014, six years ahead of schedule. 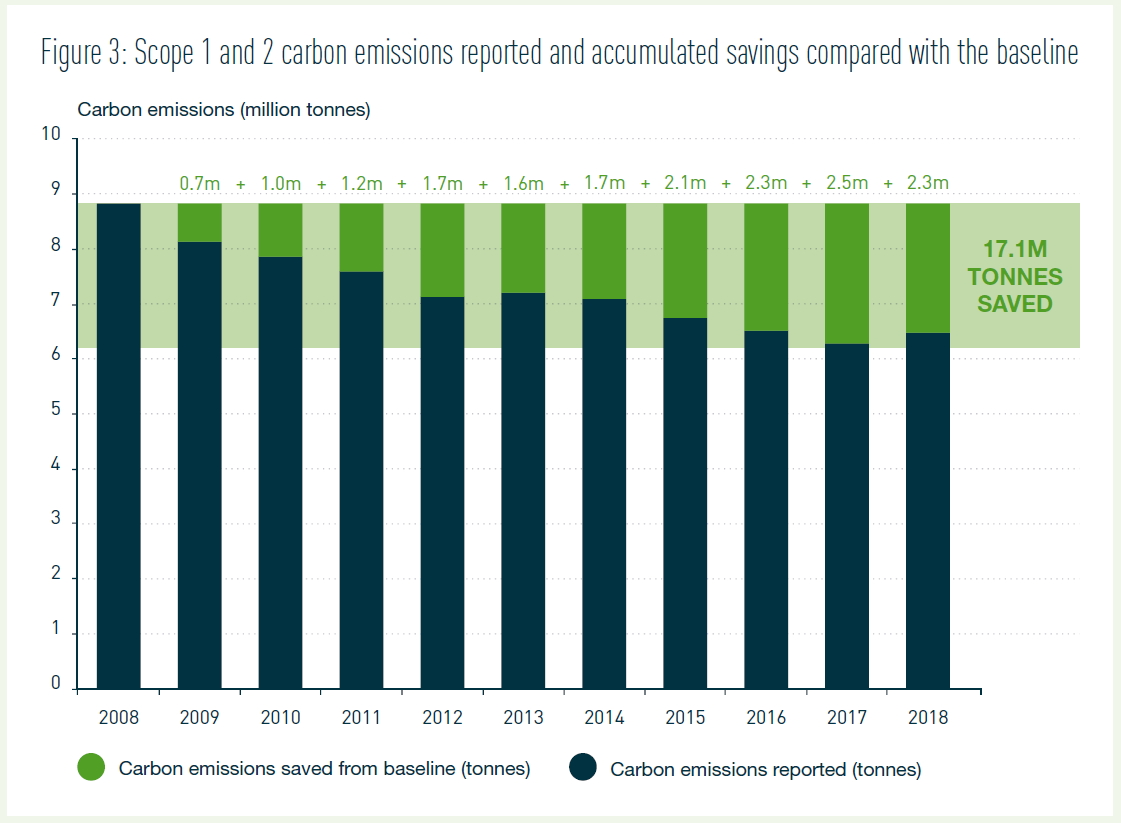 Between 2017 and 2018, EMMS group emissions increased by 177,000 tonnes, or 3%. As Figure 3 shows, typically we see combined Scope 1 and 2 emissions decreasing each year. However, in 2018 the increase was partially driven by the unusually cold weather experienced in the US and Europe, and an associated increase of Scope 1 emissions from buildings of 82,000 tonnes. In addition, Scope 1 transport emissions increased by 87,000 tonnes. This illustrates the challenges in making further reductions in Scope 1 and 2 emissions without considerable investments in low carbon transport.

It is important to remember that in eight out of the last ten years we have seen a decrease of more than 100,000 tonnes CO2 in annual emissions. This is despite challenging market conditions, the pressure from rapidly growing e-commerce, and increasingly unpredictable weather placing pressure on energy use. In a programme of this size we would expect the most dramatic improvements to be made in the earlier years. In the longer term, we certainly anticipate further reductions in emissions. In the medium-term, a stabilisation period is expected as posts gradually replace internal combustion engine vehicles with electric vehicles and national electricity grids incorporate more power from renewable sources. Given the development of technology and the sector’s growing focus on sustainability, we are confident that the group will be able to achieve this going forward. Please see the Technical Analysis section for a more detailed examination of the results.