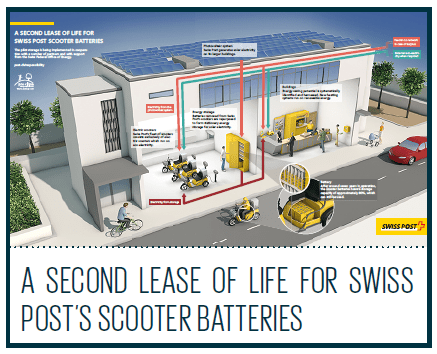 In spring 2017, Swiss Post undertook a pilot project aimed at recycling batteries from the post’s fleet of two- and three-wheeled electric delivery vehicles. The objectives of this project – to reuse and repurpose equipment no longer fit for their intended use; reduce waste; and support renewable energy consumption – are closely aligned with the post’s new 2017-2020 Corporate Responsibility Strategy.

In 2016, Swiss Post took its last petrol-powered scooter out of service, meaning that all its delivery scooters (around 6,300) are now powered electrically exclusively with certified green power from Switzerland. In doing so, the post has reduced its CO2 footprint by 4,600 tonnes per year. The initiative formed an important part of the post’s sustainability programme, “pro clima – we’re acting now”.

After approximately seven years, the batteries used by the scooters have a storage capacity of about 80%, meaning that they are no longer able to be used in mail delivery.

One pilot storage scheme utilises old scooter batteries at the Umwelt Arena Schweiz in Spreitenbach. The project is presented as part of an educational exhibition, focused on the production of solar electricity, as well as the post’s electric scooters and the energy storage units from their batteries.

Another pilot storage scheme reuses old scooter batteries in a stationary energy storage unit located at a Swiss Post post office in Neuchâtel. The unit stores power generated by solar cells installed on the roof of the building and powers the post office itself and recharges scooter batteries.