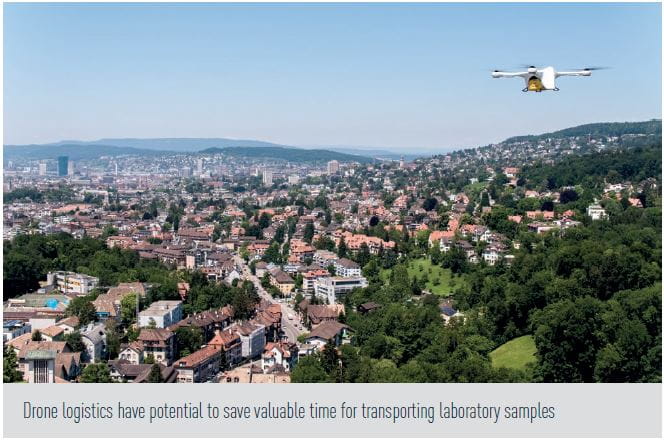 Over the last three years, Swiss Post has been developing its drone logistics service for the Swiss medical sector. Autonomous drones transport laboratory samples between hospitals in a quick, efficient and environmentally friendly manner, saving doctors and patients crucial time and emitting less carbon compared to traditional couriers on the road.

Until recently, it took almost 45 minutes to transport a laboratory sample between two hospitals in Lugano 1.2 km apart. In March 2017, the autonomous drone developed by Swiss Post and American drone manufacturer Matternet was able to reduce this transport time to a few minutes.

In Lugano, drones have now completed more than 1,000 flights without incident, drawing increased interest from the Swiss medical sector. As a result of this success, transport drones flew in the capital city of Berne and Zurich. Together with Matternet, Swiss Post was working to evaluate the link between two locations of the Insel group Berne and the Zentrallabor Zurich. The flights will be evaluated and the clients will decide whether to use the drones for day-to-day transportation of laboratory samples in the future.

Currently, in most instances laboratory samples are transported by road courier and in urgent cases by taxi. Swiss Post’s drone logistics have the potential to save even more valuable time. In addition, the use of electrically powered drones relieves roads of traffic, reduces carbon emissions and conserves natural resources. The entire drone fleet is also powered with “nature-made star”-certified green electricity from Switzerland.