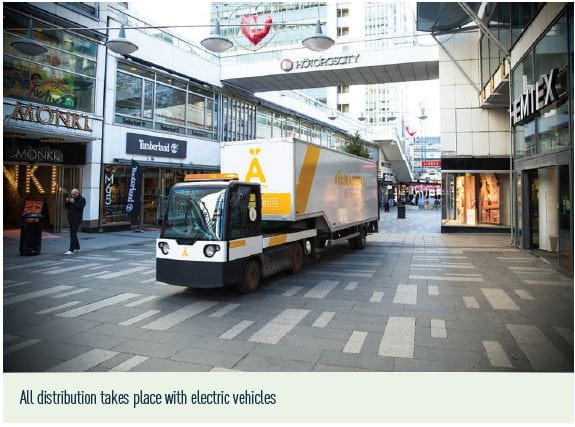 The single largest source of greenhouse gas emissions in Norway is the transport sector. Posten Norge believes that collaboration across industries is necessary to reduce city emissions while at the same time meeting increasing transport needs. The company aims to reduce emissions from heavy goods vehicles and minimise local pollution by electrifying vehicles used in urban areas. In 2017, Posten Norge set a goal to be using only renewable energy sources in its vehicles by 2025.

Posten Norge has entered into a partnership with waste management operator Ragn-Sells and other companies under the #Elskedby (beloved city) scheme in several cities in Norway and Sweden. The companies establish a joint city centre hub and collaborate by sharing electric vehicles. Each day, joint staff will drive fully-loaded vehicles into the city to deliver post, and use the same vehicle to collect waste, often from the same customers. By utilising common vehicles, emissions, traffic and noise are reduced.

The #Elskedby scheme began in Stockholm in 2017 and has been expanded to Malmö. In Norway, the cooperation started in Oslo in April 2019. There is no rigid timeframe, but the scheme is ongoing, and the aim is to implement the concept in other cities across Norway and Sweden. In Stockholm, the scheme is well-established and has resulted in a 73% reduction in CO2 emissions. The Oslo scheme is still in its early stages, but hopes are high that similar emission reductions can also be realised in the Norwegian capital.