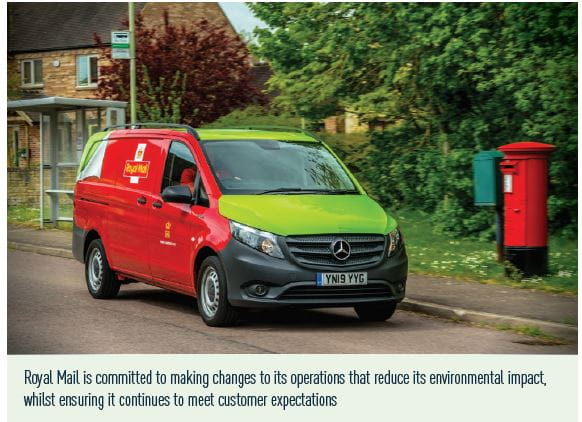 As part of its commitment to reduce its environmental impact Royal Mail continues to expand its electric vehicle fleet. This represents a key facet of the Company’s ongoing efforts to reduce CO2 emissions associated with its operations.

Following the successful deployment of 100 zero carbon emission electric vehicles across the UK last year, Royal Mail plans to roll out of a further 190 electric vans. Dispensing with the traditional red branding, the vans will be wrapped in a striking shade of green to mark the occasion. The expansion forms part of Royal Mail’s involvement in Ofgem-funded Optimise Prime – the world’s largest commercial electric vehicle project. The project aims to bring together leading power, technology, fleet and transport companies to test and implement the best approaches to electric vehicle roll-out for commercial enterprises.

The mix of Mercedes-Benz eVito and Peugeot Partner vans are charged via wall or floor mounted charging posts. They can travel between 93 to 106 miles per charge, and can be powered from flat in six to eight hours. With load capacities ranging from 3.7m3 to 6.3m3, the vehicles will operate as part of usual delivery routes in selected locations in London and surrounding areas.

Royal Mail has already reduced its overall carbon emissions by 29% since 2004. The expansion of its fleet of electric vans and trial launch of e-Trikes serve as recent examples of the Company’s efforts to continue to reduce CO2 emissions associated with its operations.