Winners of the night included Javelin Group with an outstanding nine awards including the Agency of the Year; ROTHCO picked up four awards as well as being awarded the coveted Grand Prix award; Ignition – integrated ideas people picked up three awards including 2 for the SuperValu ‘Perfect Irish Christmas’ campaign and RMG (part of the DDFH&B Group) won in two categories. Other winners on the night included: Goosebump, Target McConnells, DMCM and Starcom.

Following on from last year there was a big increase in the interest from colleges and universities all over the country for the An Post Student Marketing Campaign of the Year which was presented to Padraig O’Connor, a student in University College Cork for his campaign ‘The Business of Keeping Ahead’.

Speaking at the event, Liam Sheehan, Sales and Marketing Director An Post said: ‘Direct is the new smart and when channels integrate, together they drive powerful results. We have witnessed this in abundance this year – the quality of the work which was entered was incredible. This year we saw a broad mix of entries, where in the past agency entries made up the lions share – we saw a lot more brands showcasing their work and entering directly; a great sign that customer connection is delivering results’.

Fiona Heffernan, Head of Direct Mail An Post also said of the awards: ‘The An Post Smart Marketing Awards are about celebrating the power of customer connection and the incredible results that can be achieved. We received a huge response this year from brands and agencies, some we know and some we have met for the first time. From strategy to execution, this year’s entries show that the smartest campaign wins’.

See all the winners in detail and the event’s highlights video here. 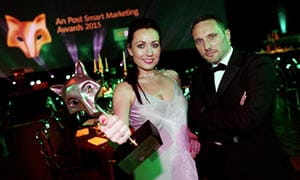 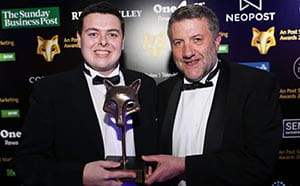