Posti remains at the forefront of green logistics 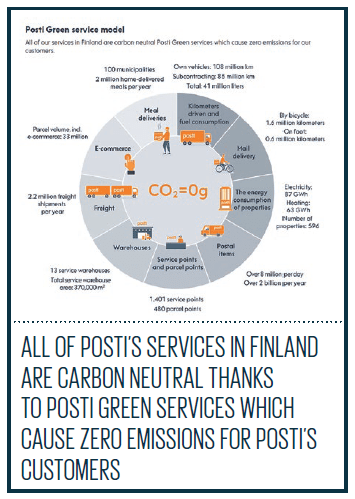 In 2011, Posti became the first postal company in the world to offer 100% carbon neutral delivery services. In 2015, the portfolio of Posti’s successful carbon neutral ‘Posti Green’ concept was expanded to include all postal services, parcels, transport and freight services and warehousing services.

Posti Green is part of Posti’s environmental programme, which aims to cut carbon emissions by 30% by 2020 (in relation to net sales, compared to 2007). Route optimisation, eco-driving, high utilisation rates and transport aggregation have been identified as mechanisms improving efficiency and reducing carbon emissions.

While the Posti Green initiative has helped reduce Posti’s carbon footprint, remaining emissions are neutralised through the funding of certified climate projects. Through these mechanisms Posti has funded wind power projects in India and Turkey, for example. The renewable energy generated through these schemes not only reduces carbon emissions but also has a positive impact on local employment.

In 2016, Posti Green’s emissions calculation processes and reporting were reviewed by a third party. Posti intends to provide customers with a certificate that Posti Green services have independent assurance.