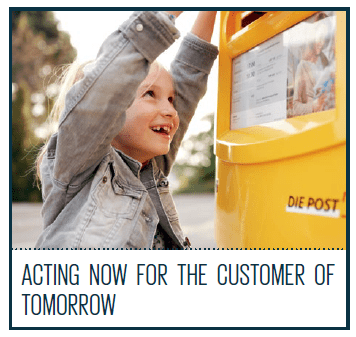 Underscoring its commitment to sustainability, Swiss Post set itself the ambitious target of reducing its carbon emissions by at least 10% by the end of 2016, based on a 2010 baseline. The postal operator intends to cut greenhouse gas emissions across all aspects of its operations, from the transportation of its deliveries, to the heating of its retail and industrial premises.

To achieve this goal, Swiss Post has rolled out a number of measures and initiatives, including switching to 100% renewable electricity from Switzerland since 2013. In addition, the group also operates ten solar power systems with a peak capacity of 5,560kW, feeding 8.7GWh of electricity into the grid.

The promotion of alternative vehicle technologies forms an equally critical component of Swiss Post’s sustainability strategy. An increasing proportion of the postal service’s delivery fleet is now powered by green electricity, biogas and biodiesel. In addition, over 6,000 electric scooters are used by Swiss Post personnel on delivery rounds, while about 100 company vans deliver parcels using domestically produced biogas. In 2015 alone, the use of environmentally friendly B7 diesel achieved savings of more than 1,100 tonnes of CO2.

At Swiss Post’s Eclépens, Härkingen and Zurich-Mulligen sorting centres, the postal operator has invested in updating the technology behind its ‘lifting beams’ - key machinery required to move letter crates in high-bay warehouses. The braking energy that they generate is now fed back as electrical energy into the grid, saving approximately 114 mWh per year, or roughly 15 tonnes of CO2.

Alongside the implementation of ongoing and planned measures, Swiss Post has already set the basis for the next strategy. Swiss Post will further align its climate strategy with the Intergovernmental Panel on Climate Change’s recommended goal of limiting global warming to less than 2°C compared to pre-industrial levels.