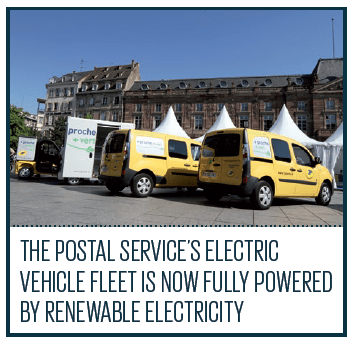 In 2014, Le Groupe La Poste’s Corporate Social Responsibility (CSR) team laid the foundations of its ambitious environmental plan. Two main primary targets were set: to achieve a 15% decrease in the postal service’s total GHG emissions by 2020, and also to successfully switch to a 100% renewable electricity  supply over the same time period.

Firstly, the strategic decision to make the transition to renewable energy fully aligns the postal service’s policy with that of both the French government and also the group’s shareholder, Caisse des Dépôts et Consignations.

Secondly, it has now established Le Group La Poste as a respected ‘green’ industry leader. The postal service owns one of the world’s largest electric vehicle fleets, which is now fully powered by renewable electricity.

Thirdly, from a financial standpoint, Le Groupe La Poste has successfully demonstrated that transitioning to renewable energy can deliver substantial cost savings. Le Groupe La Poste has committed to offsetting 100% of CO2 emissions from mail, parcel and digital operations. By transitioning to renewable energy, CO2 emissions have been considerably reduced, resulting in a decrease in offsetting costs.