In its fourth edition, the IPC cross-border e-commerce shopper survey has been extended to over 33,500 consumers in 41 different countries across North & South America, Asia Pacific, Europe and the Middle East, establishing itself as the largest-ever global consumer survey, focusing on cross-border e-commerce. 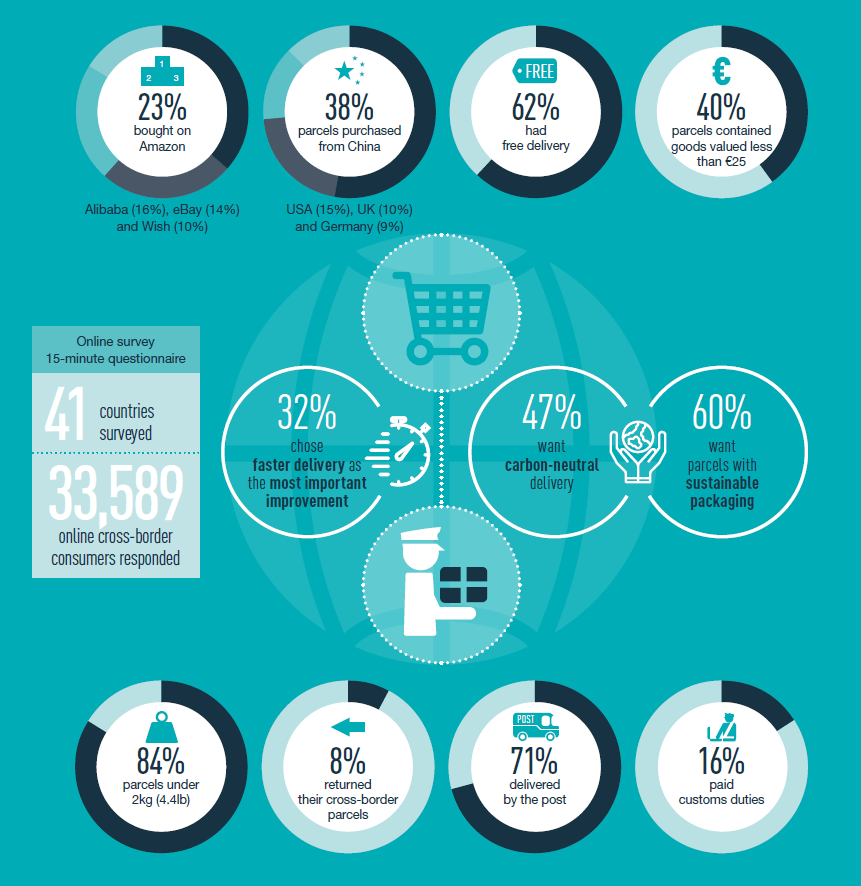 Holger Winklbauer, CEO of IPC said: “Thanks to the continued increase of the geographical scope and sample of our survey, we have been able to deepen and consolidate results from the previous years. Our research showed once again that posts remain in an ideal position for delivering light-weight items through their network and also continue to be the delivery partner of choice of more than 70% of cross-border online shoppers. This edition is also marked by a significant expansion within South-East Asia, where consumers are younger, shop online more frequently and are more demanding when it comes to delivery. This provides important insights into future market developments for the posts”

Cost for sustainable packaging and delivery no issue for consumers

According to the latest research, consumers in all markets are well aware of the environmental consequences of the increase in cross-border e-commerce.

48% of respondents would like the delivery of their parcels to be carbon-neutral, and 43% would be willing to pay €0.10 for carbon-neutral delivery. 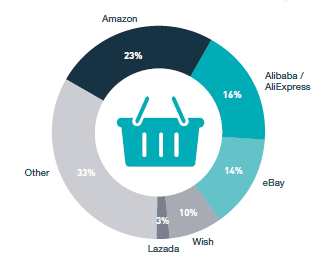 When looking at the 25 trend countries, China’s share has increased year-on-year. It rose by 7% in 2017 and by a slightly more moderate 3% in 2018. On the other hand, the other four largest countries have all slightly decreased in share over the past two years.

When asked about delivery, consumers confirmed that the post accounted for 71% of most recent cross-border deliveries.

When consumers were asked about their preferred place to have their parcels delivered to, the most convenient delivery location was home (59%), followed by a safe place at home (22%), office / workplace (18%) and an alternative address (18%).

The majority (84%) of cross-border parcels weighed up to 2kg, of which 9% weighed less than 100g, and 40% of goods purchased cross-border cost less than €25, with 47% of respondents saying that this purchase would have fit into their mailbox.

However, the trends also show that all consumers have increased expectations in terms of delivery speed year-on-year. When asked what one thing posts should do to improve cross-border delivery, 32% chose faster delivery.

To download the key findings from the research go to www.ipc.be/shopper.

About International Post Corporation
International Post Corporation (IPC) is the leading service provider of the global postal industry that provides leadership by driving service quality, interoperability and business-critical intelligence to support posts in defending existing business and expanding into new growth areas. It is a cooperative association of 23 member postal operators in Asia Pacific, Europe and North America. IPC’s solutions and services are used by over 180 posts worldwide. Since 1989 IPC has set standards for upgrading quality and service performance and developed technological solutions that help members enhance service for international letters, packets and parcels. IPC engages in industry research, creates business-critical intelligence, provides a range of platforms and programmes for member post CEOs and senior management to exchange best practices and discuss strategy. IPC also manages the system for incentive-based payments between postal operators.