Brussels, 27 January 2020 – In its fifth edition, the IPC Cross-Border E-commerce Shopper Survey has been further extended to now reach over 35,700 consumers in 41 different countries across North & South America, Asia Pacific and Europe, confirming itself as the largest-ever global consumer survey, focusing on cross-border e-commerce. The countries included in the scope of the survey are: IPC member countries , plus Argentina, Brazil, Chile, China, Estonia, Indonesia, India, Japan, Latvia, Lithuania, Mexico, Poland, Russia, Slovenia, South Korea and Turkey. In 2019, coinciding with recent celebration of the tenth anniversary of the IPC Postal Sector Sustainability programme and the full achievement of the original targets set, there has been a deep dive into the topic of sustainability in cross-border online shopping.

Holger Winklbauer, CEO of IPC said: “Over the five editions of the Cross-Border E-commerce Shopper Survey we have continuously increased the geographical scope and sample. As 25 countries have participated in all five editions of the research, we have been able to report on five-year trends in this year’s report. We also explored consumers’ views on sustainability when shopping online cross-border. This has highlighted the importance to consumers in providing recyclable packaging and sustainable delivery. This aligns very well with the efforts the postal sector has been making in the field of sustainability and supports the new direction of our sustainability programme through alignment to the wider UN Sustainable Development Goals.” 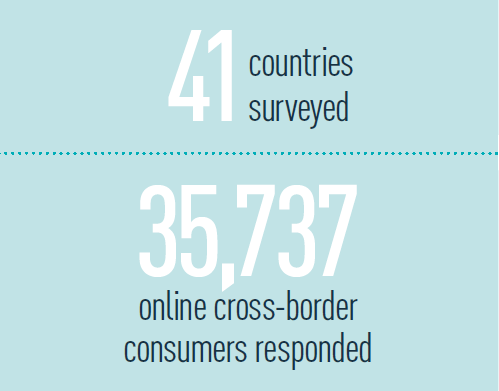 Sixty-six percent of consumers surveyed would like packaging of their cross-border online purchase to be recyclable, with 47% strongly agreeing and another 19% agreeing. They also expressed a strong preference to receive parcels in cardboard as opposed to plastic.

When looking at the evolution of the main e-commerce exporting countries between 2016 and 2019, it is notable that after China’s sharp growth from 2016 to 2018, there is almost no change in 2019.  China’s share increased by 7% in 2017 and by a slightly more moderate 3% in 2018 and stabilised in 2019. The other four largest countries have also stabilised over the past two years.
…but legislative changes may affect consumer behaviour
Respondents who had made a purchase from China in the past year were asked what they would do if online purchases from China increased by €10 per item. This new question was asked in anticipation of European Union changes to VAT and customs legislation for low-cost items coming from China, and also to reflect possible higher postal delivery costs for future Chinese purchases.

Thirty-six percent of these respondents said they would stop buying from China altogether, 41% would buy slightly less from China, and 13% would have no change to their purchase activity.

Of these six elements, Delivery speed clearly had the lowest level of consumer satisfaction. This was the case in almost all 41 surveyed markets. The most common delivery speed for cross-border purchases was 15-29 days (20%), with 11% of respondents having to wait 30 days or more for their purchase to arrive. This could be explained by the high percentage of light-weight, low-value purchases coming from China.


About International Post Corporation
International Post Corporation (IPC) is the leading service provider of the global postal industry that provides leadership by driving service quality, interoperability and business-critical intelligence to support posts in defending existing business and expanding into new growth areas. It is a cooperative association of 25 member postal operators in Asia Pacific, Europe and North America. IPC’s solutions and services are used by over 180 posts worldwide. Since 1989 IPC has set standards for upgrading quality and service performance and developed technological solutions that help members enhance service for international letters, packets and parcels. IPC engages in industry research, creates business-critical intelligence, provides a range of platforms and programmes for member post CEOs and senior management to exchange best practices and discuss strategy. IPC also manages the system for incentive-based payments between postal operators.