The Black Friday phenomenon is clearly on a rise, with sales in both the US and Europe at record highs. This article looks at the figures for 2016 and identifies several trends.

This article was updated on 9 January to include new results and insights.

The Black Friday phenomenon is clearly on a rise, with sales in both the US and Europe at record highs.

In the US, consumers increased their online spending by nearly 18% to US$5.27bn on Thanksgiving Day and Black Friday (24-25 November), according to a data survey from technology firm Adobe. Black Friday sales in the US were up nearly 22% at US$3.34bn.

In Europe, Amazon announced strong sales growth of up to 40% in major European markets on Black Friday. For instance, Amazon said that it received about 1.4m orders on Black Friday in France, which represents a 40% rise since last year. More than 1,000 French SMEs participated in Black Friday and tripled their orders compared to 2015. In Italy, Amazon received 1.1m orders on Black Friday, which was a new record. The hundreds of merchants with special offers on the Italian marketplace more than doubled their orders compared to Black Friday last year. Postal operators are reaping the benefits of this growth, with PostNord reporting a 34% volume increase during the Black Friday weekend. Meanwhile, Posten Norge reported record parcel volumes on Black Friday while more than 200,000 parcels were handled on Cyber Monday, according to estimates. “In three years, Black Friday confirmed its position as the biggest single day for both internet shoppers and online stores,” Gunnar Henriksen, e-commerce director of Norway Post, said.

The UK also saw strong growth figures, with UK online shoppers spending a total of £1.23bn on online retail websites on Black Friday, according to British e-commerce association IMRG. While this figure was a 12.2% increase compared to Black Friday in 2015, it is below the original forecasted growth of 16%, IMRG said. Further to this, each of the four days leading up to Black Friday generated strong sales growth of between 23.4% and 33.7%.

Black Friday – initially an American event linked to Thanksgiving – has been extended to an entire week in recent years, with many retailers starting to offer sales on Monday 21 November which lasted until Monday 28 November.  For example, major US retailers such as Wal-Mart and Amazon pushed holiday promotions earlier than ever and spread them out over a longer period.

According to comScore, daily online sales in the US topped the US$1bn mark ten times in the days leading up to (and including) Black Friday, compared to only twice during the same period in 2015.

Black Friday used to be more of a bricks-and-mortar affair and didn’t see such impressive online sales figures as Cyber Monday (the Monday after the Thanksgiving holiday weekend). However, Black Friday is catching up and becoming as much about finding interesting deals online as it is about high-street shopping.

Meanwhile, the number of shoppers who plan on shopping online on Cyber Monday has fallen from the highs reached earlier in the decade.

Mobile also played a role in the increase of sales, with Adobe Digital Insights saying mobile sales on Cyber Monday totalled US$1.07bn, a 34% year-over-year increase. Sales on mobile devices, including smartphones and tablets, were 31% of sales for the day.

Some people are, of course, more organised than others. According to an annual PostNord survey, about one in six consumers in the Nordic region had already shopped for Christmas gifts online before Black Friday,  while more than half of US internet users have already begun to cross items off their holiday shopping lists, according to data from Epsilon.

Other promotions and sales

While Black Friday and Cyber Monday remain the single biggest e-commerce days in many markets, other promotions and sales days – some of them limited to single markets – see quite remarkable online sales volumes as well.

An article by British integrator Whistl even states that “the shopping holiday has failed to take off at levels seen in across the pond, and popularity has dwindled in recent years – which could be down to consumers now perceiving the event as a marketing gimmick.” While Black Friday continues to grow, it hasn’t lived up to the forecasted volume increases. As a result, companies and marketers are looking for other occasions to boost their online sales, for instance with a number of new shopping holidays in the Christmas season, including Small Business Saturday, Sofa Sunday, and Manic Monday in the UK. And of course, the traditional sales periods –summer, Boxing Day, etc. – still appeal to a large swathe of consumers and – with the right marketing – could deliver another boost to online sales.

In the UK, e-commerce association IMRG estimates that total spend on online retail sites on Christmas Day will rise by 10.1% to £805m in 2016. Boxing Day – the day after Christmas Day – is also estimated to get close to being a billion-pound online shopping day, with total spend forecast to hit £984m, a 15% increase on Boxing Day 2015, according to its estimates, supported by SimilarWeb data.

In July 2015, Amazon launched Prime Day for the first time and a year later, the one-day global sales event has seen remarkable sales volumes. The 2016 event, which took place on 12 July, saw 60% more products shipped worldwide compared to Prime Day 2015, with a 50% boost in the US. Meanwhile, SimilarWeb in the UK reported that traffic to the Amazon website itself was up 36%, with other UK retailers enjoying a traffic boost of around 22% despite making very little effort. Moreover, an Internet Retailer survey showed that customer satisfaction with Prime Day was high.

Other smaller promotional campaigns are likely to play a role as well, like Canada Post’s Free Shipping Tuesdays in the month of October. These promotions are framed in the Small Business Month, which was created to promote small businesses. In 2016, Canada Post introduced the Free Shipping Tuesday offer, which entitles customers to one parcel shipment at no cost every Tuesday in October.

One of the main e-commerce events of the year is Alibaba’s 11.11 Global Shopping Festival, which has seen remarkable growth in recent years.

The results for the Black Friday and Cyber Monday show that neither promotional days – or even both combined – are close to seeing the amount of sales seen during Alibaba’s 11.11 Global Shopping Festival.

The 11.11 event, previously called from Singles Day, is an annual promotional event on Tmall to reward consumers through discounts.

Alibaba said sales during 2016’s global shopping festival had reached US$17.7bn (€16.7bn), a rise of 32% on last year's sales, which totalled US$14.3bn. The event has become the biggest 24-hour online sale event both in China and globally.

As a comparison, Black Friday saw US$3.34bn in online sales in the US and £1.23bn in the UK – two of the major e-commerce markets on Black Friday. Even with Cyber Monday included – at US$3.45bn in the US – these figures are still well below Alibaba’s one-day event.

The chart below show how Alibaba’s sales event has caught up and overtaken both Black Friday and Cyber Monday (US-only figures) over the past years. 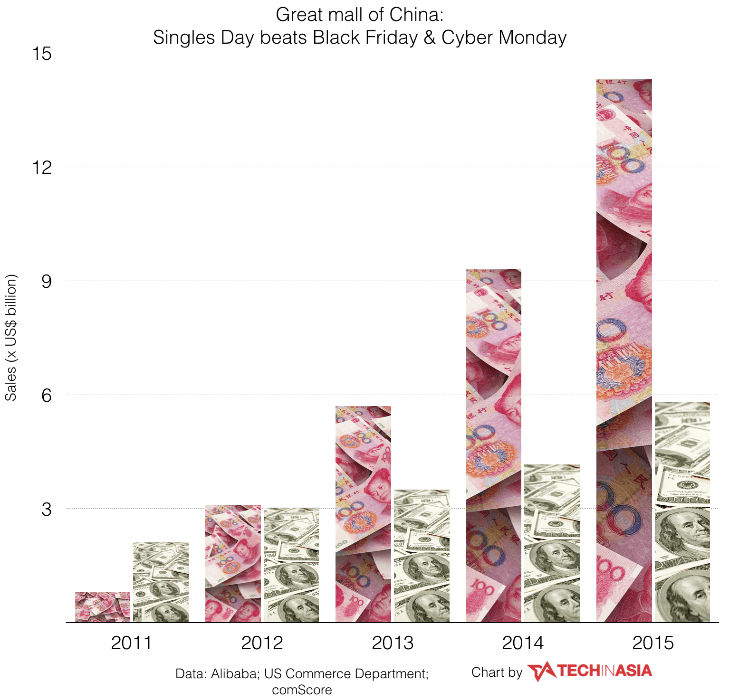 While the rate of growth has slowed down – from 60% in 2015 to 32% in 2016 – the global shopping event is still seeing much higher growth figures than Black Friday or Cyber Monday. The relevance of the 11.11 Festival as the biggest single-day e-commerce event will only increase.

A lot of this growth is driven by Chinese consumers becoming more enthusiastic online shoppers every year. This is especially true for Chinese millennials who are already the most digitally active and aware group of consumers on the planet. At more than 400m strong, millennials account for almost a third of China’s population and amount to more than the working population of the US and Western Europe combined. It will be interesting to see whether Alibaba can keep growing its domestic market and further expand its global success.

For more information about the 11.11 event, check our article here.