A first in Zeist: PostNL delivers all mail electrically 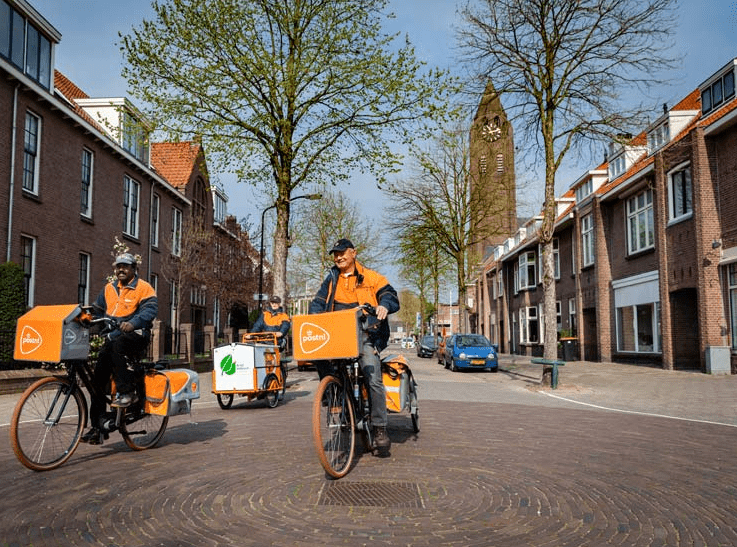 Zeist is the first Dutch community where PostNL delivers all mail electrically. The 48 postal deliverers who deliver mail to the residents of Zeist, day after day, regardless of what the weather brings, are the first. From now on, they will deliver all mail on an electric bicycle or an electric carrier bicycle. Alderman Catsburg gave the official green light on 2 April and waved the postal deliverers off at the start of their delivery rounds.
Less and less mail is being sent in the Netherlands. Even so, the mail that we send is still important and relevant. PostNL wants to continue to deliver all mail to the correct addresses in the Netherlands and on time. Now that people are sending fewer items by mail, the postal deliverers must walk or cycle larger areas. This requires a different approach and organisation of the way mail is delivered. By deploying electric (carrier) bicycles, PostNL helps postal deliverers to do their jobs well, efficiently and sustainably.

PostNL’s decision to use electric bicycles and carrier bicycles was a logical choice. Stefan Stekelenborg, Project Leader Implementation at PostNL: ‘Sustainability has been a high priority at PostNL for many years. In Zeist, we are now deploying 20 electric bicycles and 20 electric carrier bicycles. The postal deliverers will also be delivering the mail from 1 depot from now on, located on Rozenstraat, as opposed to 9 depots previously.’ This means that PostNL in Zeist will be travelling 110 km less by car: only 1 depot needs to be supplied. Per year, this amounts to about 27,000 km.

The municipality of Zeist is also enthusiastic about becoming more sustainable. ‘In Zeist, we are proud of the sustainable initiatives  of the residents and businesses. I love the fact that Zeist is the first community in the Netherlands where PostNL delivers mail by electric bicycle. In doing so, PostNL is contributing to the climate objectives. It would be great if other parties followed this example’, says Wouter Catsburg, alderman for sustainability, mobility and public space, amongst other things.

PostNL plans to deliver mail electrically throughout the Netherlands and expects to reach that point over a period of 2 years. This would imply a transition from 2,300 to fewer than 1,000 depots. Also, PostNL would deliver mail across the Netherlands using thousands of electric bicycles and electric carrier bicycles. Following Ede, Alphen aan de Rijn and Rotterdam, Zeist is the fourth location where mail delivery by electric (carrier) bicycles was tested. It’s also the first location where all mail is delivered electrically.