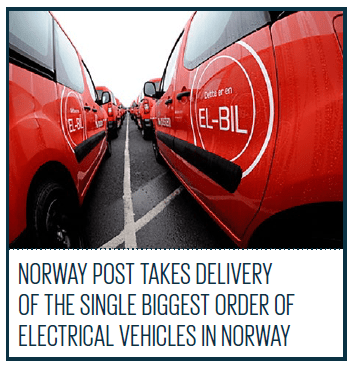 As part of its ambitious target of replacing fossil fuel powered vehicles in its delivery fleet with zero emissions alternatives, Norway Post has assembled the largest fleet of electric vehicles currently operating inside Norway. It is comprised of 580 electric mopeds, 420 electric cars and 180 electric trolleys.

Underlining the scale of Norway Post’s commitment to embracing the latest electrical vehicle technology, in June 2015 the group announced that it had made one of the world’s largest single purchases of electric cars by ordering 241 new electric vehicles.

Norway Post’s strategy to adopt zero emissions alternatives was originally conceived in 2008. Since then, the implementation of zero emissions mobility solutions has so far resulted in CO2-free mail distribution in more than 20 urban areas throughout Norway. This has led to improved air quality, reduced noise and fewer greenhouse gas emissions in major urban areas such as Ålesund, Bergen and Trondheim.