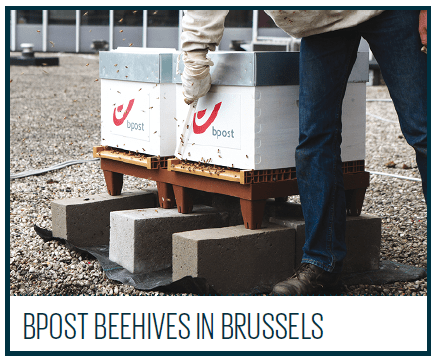 In 2016, bpost established bee colonies on the roofs of the post’s headquarters in Brussels. This pilot project, known as ‘BeePost’, was undertaken in partnership with the ‘Made in Abeilles’ cooperative organisation, a non-profit that works to protect bees and support beekeepers across Belgium. The aim of the project is to help solve the massive bee mortality and take action against the loss of biodiversity. It also fits into bpost’s overall company sustainability strategy linked to the United Nations Sustainable Development Goals.

The project promotes better use of the roofs of the company’s buildings and enhancing biodiversity in the surrounding area, on top of the regular energy reduction initiatives already taken to reduce its ecological footprint. The project is also a means by which bpost sensitizes its staff and involves them in the company’s environmental policies and initiatives, by raising awareness on biodiversity and the importance of bees. The BeePost project also demonstrates how companies can use their facilities to achieve socially-beneficial objectives, and thus strengthen its community and customer relations.

Furthermore, as a semi-public company, bpost believes it should set positive examples which can be followed by other companies.

Since its initiation, the BeePost project has been highly successful in raising awareness about the importance of protecting bees and biodiversity. The BeePost Facebook page has attracted over 700 followers, and the initiative has clearly caught the attention of the post’s employees. At internal conferences, employees rated the project as the most effective for educating staff about the different ways in which bpost can address environmental opportunities and challenges. Through the project bpost also achieves a yearly local production of 100 pots of honey.