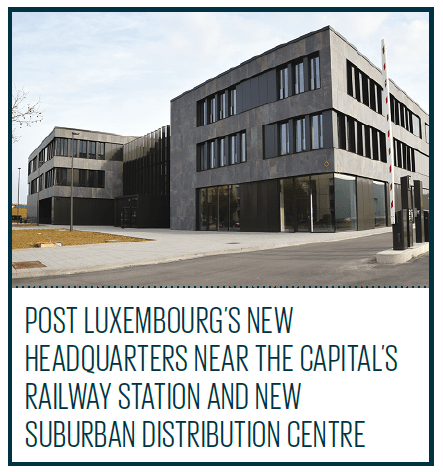 In an effort to reduce its carbon emissions, POST Luxembourg has over the course of 2017 taken significant steps to improving energy efficiency at both its corporate headquarters as well as at its main distribution centre in Luxembourg City.

At the beginning of the year, 700 POST Luxembourg staff members moved into the new Mercier building situated close to the Grand Duchy’s central train station. POST Luxembourg has provisionally obtained a platinum pre-certification rating from the German Sustainable Building Council (DGNB) for its new headquarters, and hopes to have this officially confirmed by the beginning of 2018.

Elsewhere, the postal service has also moved its main distribution centre in Luxembourg’s capital to a new eco-friendly building situated in the southern suburb of Cloche d’Or.

Both of POST Luxembourg’s new premises are characterised by their green and eco-friendly architecture and design, and the switch to these new buildings provides further evidence of the company’s long-term commitment to reducing energy consumption and carbon dioxide emissions across its business.