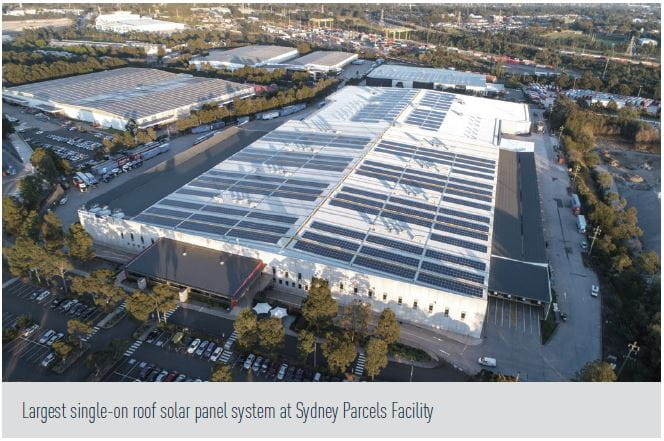 A suite of programmes and initiatives have put Australia Post well on track to achieve its carbon emissions reduction target of 25% by 2020. Along with energy efficiency measures and the deployment of electric vehicles, the organisation has also tackled emissions in its supply chain.

Since 2000, Australia Post has managed to reduce its carbon emissions by 20%, despite delivering to over 11.7m addresses with a delivery fleet of 16,000 vehicles. Integrating new technology has been a key component of this effort and has provided significant financial benefits. In 2017, Australia’s largest single-on roof solar panel system (at the time) was installed at the Sydney Parcels Facility, saving an estimated AU$0.75m in operating costs per year. Further rolling energy efficiency and renewable energy investments have also delivered AU$8m in annual cost savings.

In addition, many of Australian postmen/women have chosen to swap their motorbikes for self-propelled bicycles and electric bikes, reducing emissions and improving health and well-being. The e-bikes allow posties to cover up to 35 km in a day and reach 1,000 delivery points. Australia Post has also introduced fuel efficient motorbikes to their delivery fleet, driving a 62% improvement in fuel efficiency since 2013.

Since 2010, Australia Post has raised the ambition water mark higher by going beyond its own sites and introducing initiatives to reduce emissions throughout its supply chain. Through partnerships with groups such as TerraCycle, Planet Ark and Mobile Muster, Australia Post have enabled the reuse and recycling of more than 40,000 tonnes of material since 2016. The post has also helped develop the world-first Nespresso recycling satchel to send used coffee pods to a purpose-built recycling centre, and their own satchel packaging is now completely recyclable.

Many of these ongoing measures will continue to feature in Australia Post’s Environmental Action Plan. The initiative was launched in 2018 and contains 34 actions in four key areas including emissions reduction, reuse and recycling, resilience building and supply chain activities.