In 2008 and 2009 they started to test a different model, adding both broadcast and digital media to their media mix. Broadcast was designed to increase the reach of the total campaign, and digital media to provide an additional response channel for donors. In both years they saw successful increases in numbers of donors recruited. In 2009 they also noticed that response from mail and door drops, which had been in decline for years, had increased.

By 2010, Salvation Army saw a step change in online income, it had quadrupled in just four years. With just a few thousand pounds invested in search it was clear that online activity was not driving this income. To enable these digital donations to be attributed to the correct offline channels, and to understand the relationships between the channels used, they turned to econometrics. Once the understanding of this model had been achieved, working with Mike Colling & Company (MC&C), Salvation Army turned to the challenge of exploiting its profitability. A planning tool was built, powered by the econometric equations; enabling The Salvation Army to forecast income and donor numbers from different investment scenarios. This tool showed mail and TV driving online response, with strong positive interactions between the two. The Salvation Army’s findings not only matched Royal Mail MarketReach research but also reinforced the learnings from the IPA Databank. The 2014 IPA Effectiveness Award case study highlights:

The paper also created surprising new learnings, specifically around the role of mail in a digital age:

In the years from 2005 to 2007, the cost of donors recruited via mail rose by 20%. Between 2008 and 2012, cost per new donor fell by 16%, whilst the number of new donors recruited grew from 50,000 to more than 136,000. MC&C attribute this extraordinary improvement in results to the six key learnings below, the most important of which is the integration between mail, broadcast media and search.

Key learnings from this campaign included:

The Salvation Army increased volume in both addressed mail (2.7x) and door drops (1.6x) over five years. By integrating mail with digital and broadcast media, and by accurately attributing results and understanding the roles each channel plays in the media mix, MC&C increased their clients net income and profitability. MC&C were awarded at the IPA Effectiveness Awards (Silver, 2014), to follow their DMA Award for Media Strategy (Gold, 2011). 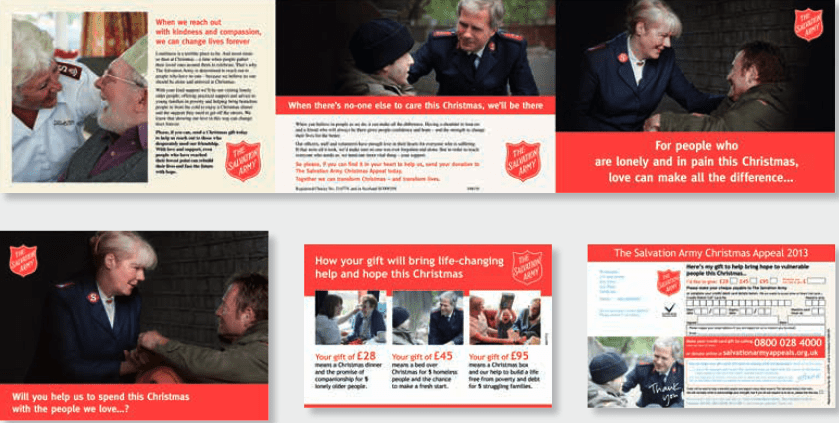