Every year, the end of the year is peak season for the posts, with millions of greetings cards being sent with holiday wishes for friends and family. Moreover, e-commerce volumes are peaking due to all the online Christmas shopping – a more recent trend.

Every year, the end of the year is peak season for the posts, with millions of greetings cards being sent with holiday wishes for friends and family. Moreover, e-commerce volumes are peaking due to all the online Christmas shopping – a more recent trend.

For instance, between 1 and 23 December 2017, Swiss Post employees processed more than 18m parcels, despite the fact that the calendar left one fewer day for sorting this year than in previous years. On peak days in December, over 1m parcels a day passed through the systems at its sorting centres. On 19 December, Swiss Post set a new record: its three centres processed more than 1.3m parcels, more than ever before on a single day.

The record-breaking online sales during the holiday season grew Posti's parcel volume to 37m postal items in 2017. Parcel volume increased by 9% compared to the previous year. Posti also delivered more than 26m Christmas cards were sent this year in Finland.

bpost announced it would deliver around 350,000 parcels per day, while its letter mail traffic would increase by 30% during the peak season.

An Post delivered 1.74m parcels in the five week lead-up to Christmas, which was a new record and up 27% on the previous year. In a statement sent to Post&Parcel on 5 January, An Post said that parcel volumes from Amazon alone showed an increase of more than 30% on 2016.

To be able to cope with the peak volumes around the holiday season, posts begin to prepare their operations months in advance.

The US Postal Service expected the week starting on 18 December – the last week before Christmas – to be the busiest week of the holiday mailing and shipping season. The postal operator expected to process and deliver nearly 3bn pieces of First-Class Mail, including greeting cards, during that week alone. The USPS also expected to deliver nearly 200m packages each week from 11 till 24 December. In total, the post anticipated delivering more than 15bn total pieces of mail during the 2017 holiday season (running from Thanksgiving end of November until New Year’s Day). USPS expected to deliver more than 850 million packages, an increase of more than 10 percent compared to the same period last year.

To be able to handle these record volumes more efficiently, Swiss Post upgraded its parcel centres with additional high-performance sorting systems, increasing capacity by 25 percent over the past few years. The construction of three additional regional parcel centres in Cadenazzo, Untervaz and Vétroz has already been planned. This will enable punctual processing of parcel volumes, which are growing each year. To keep things running smoothly during the Christmas rush, Swiss Post employees undertook additional assignments on several occasions, with all available staff reporting for work and the machines in the letter centres running almost round the clock, including weekends.

Posti has ensured the smoothness of deliveries and strengthened its service point network, for instance, by adding more lockers to the Posti parcel locker network and by opening temporary pop-up pickup points for the Christmas season. The number of Posti service points has continued to increase by 40% during the last six years.

New Zealand Post was prepared to process an anticipated 41.5m letters and parcels in December – including 20% more parcels compared to the previous year. NZ Post took on an extra 600 staff, 200 vans, 13 line-haul trucks and operated an additional 737 aircraft to meet the predicted increased Christmas volumes.

bpost announced 700 additional delivery staff were hired to cope with the increase in both parcel and standard mail deliveries.

E-commerce is growing year after year and 2017 was yet another record-breaking year. According to MasterCard, US e-commerce sales grew 18.1% during the 2017 holiday season versus the previous year’s holiday period, while Adobe Digital Insights reported a 14.7% year-on-year increase. Interesting to note is that mobile commerce is a strong growth driver, with Adobe Digital Insights reporting a 22.2% year-on-year increase during the Thanksgiving–Cyber Monday week at the end of November. Mobile sales accounted for about a third of total e-commerce sales and will continue to grow over the coming years.

This surge in e-commerce is driving the increased postal volumes. Finland’s Posti, for instance, saw parcel volume grow 9% in 2017 due to record-breaking online sales. "During the year, e-commerce picked up and the number of e-commerce parcels grew by more than 15%", said Toni Laaksonen, Vice President, Parcel Services at Posti.

Australia Post released an infographic with the key figures from the 2017 Christmas season. They reported a 17% increase in parcel deliveries. Over 37m parcels delivered in December, with 2.7m parcels delivered on 18 December, the busiest day of the year. Cross-border e-commerce deliveries also increased: over 4.3m cross-border parcels were delivered. The main source countries were China, the US and the UK. 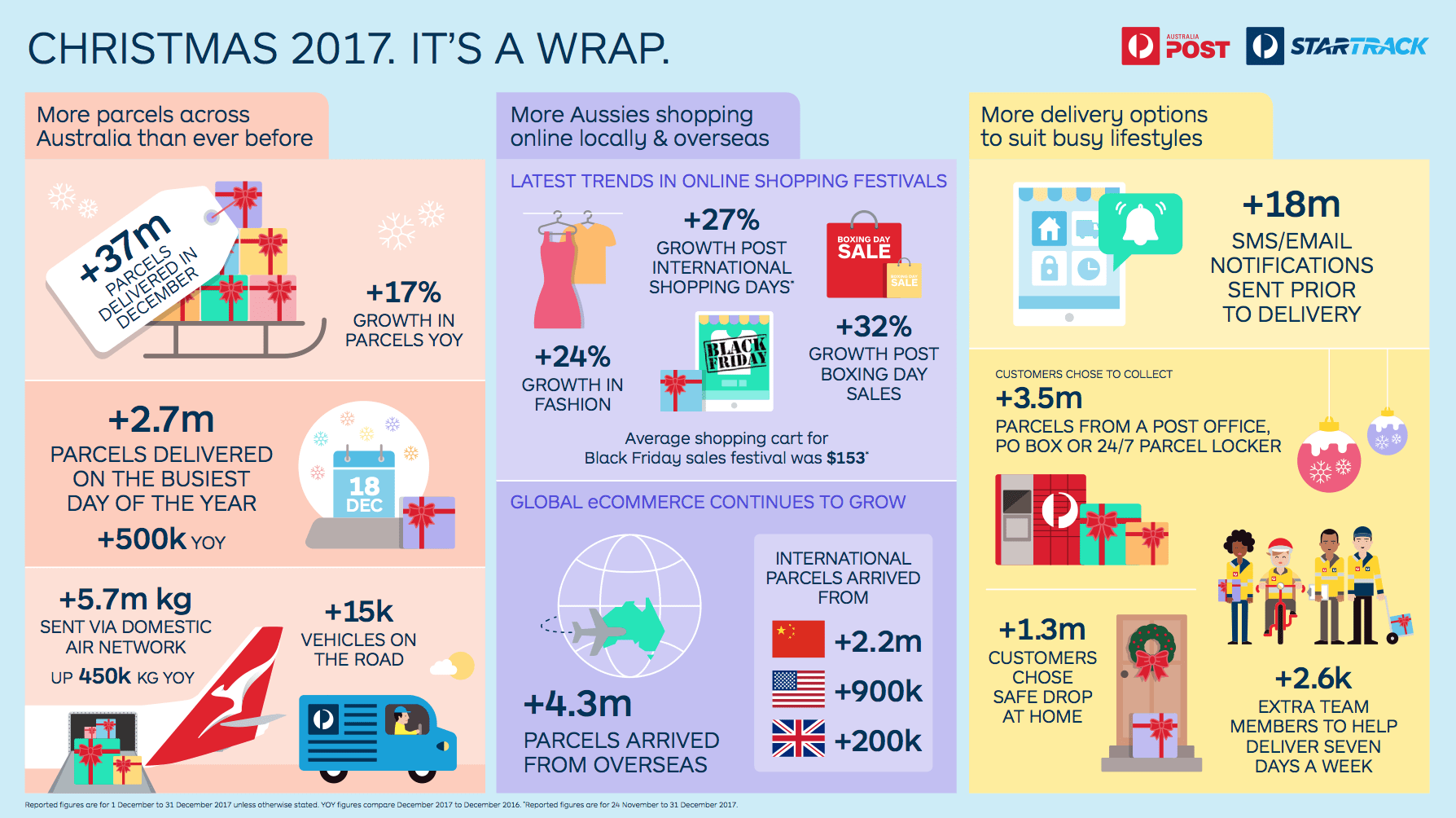 Only on Monday and Tuesday before Christmas, Poczta Polska's customers shipped over 1m packages. During the Christmas period, the number of shipments sent in relation to normal months, like August, increased by an average of 35%. During the most intense week preceding Christmas, package volumes were 81% higher than the 2017 average. Poczta Polska also recorded record volumes of cross-border shipments – the largest growth was observed in parcel traffic coming from China.

The increase in online shopping has also led to an increase in returns, which peaked in the days after Christmas and New Year’s Day and broke records in many markets.

bpost reported a record volume of returned shipments on the days after Christmas and New Year’s Day, with around 25,000 returns on both days – a 65% increase compared to the average return volumes.
UPS went so far as to name 3 January as National Returns Day, expecting to see up to 1.4m return shipments on that day alone – up 8% compared to the previous year. In December 2017, consumers shipped more than 1 million returns packages to retailers daily, a pace expected to last into early January 2018, said UPS.

At the end of the year, millions of people continue to spread Christmas cheer through Christmas cards. In the UK, Royal Mail reported that Christmas cards remain very popular: according to the Greeting Card Association (GCA), over 1.13bn Christmas cards are bought each year in the UK.

Swiss Post delivered exactly 20,188 children’s letters and cards to the iconic Christmas figure and assisted him in answering his mail. These campaign showcase the posts’ positive role in society.
Other holiday campaigns focus on helping others during this season of cheer, like for instance Swiss Post’ “2 x Christmas” solidarity campaign. The campaign has been running for 21 years now, working together with the Swiss Red Cross (SRC), the broadcaster SRG SSR and retailer Coop.