The staff in Sorting and Delivery as well as the entire management, made a formidable effort last year to uphold the quality of postal services. Was the effort worth it? Were mail items delivered on time?

With ever-increasing parcel volumes and difficult working conditions because of coronavirus, the team faced a huge, ongoing challenge in sorting and delivering items last year. Day after day, they gave their all to ensure consignments entrusted to them made it to recipients on time. And they were successful. The postal legislation directives that mandate punctuality of 97.0 percent for letters and 95.0 percent for parcels were met.

Swiss Post proved that you can count on them, even during particularly trying times. Thanks to the mutual support and the great commitment of the staff and entire management, the population and companies were provided a service at all times and throughout Switzerland. Swiss Post thus made a valuable contribution to helping people stay at home.

Excluded months
Due to the unusual situation, the Federal Postal Services Commission (PostComTarget not accessible) agreed that the punctuality measurement for letters could exclude the period from mid-March to July, as well as December 2020. For parcels, Swiss Post was permitted to exclude March to July and October to December 2020. This means that letter delivery was measured for six and a half months, and parcels for four months, during which time the situation was more “normal”.

Letters and parcels on time
98.0 percent of A Mail letters and 99.2 percent of B Mail letters reached their recipients on time in the measurement period of six and a half months specified by postal legislation; 95.4 percent of PostPac Priority parcels and 95.5 percent of PostPac Economy parcels reached their recipients on time in the four-month measurement period specified. This means that the legal requirements were met for letters and parcels.

As is to be expected, the results for the entire year were lower, with A Mail letters at 97.1 percent (compared to 98 percent), while for B Mail letters, the results were almost the same at 99.1 percent (compared to 99.2 percent). However, these statistics still show that Swiss Post provided excellent service over the whole year under very difficult conditions. For example, staff in the letter centers sorted small parcels in addition to their daily tasks to help the parcel centers. The figures for parcels were also lower for the year as a whole: 90.1 percent for PostPac Priority and 89.9 percent for PostPac Economy.

Record parcel year
These scores are still high considering the challenges that had to be overcome to achieve them. What began with an almost explosive rise in parcel volumes during the first lockdown in spring, culminated in peak figures of over 1.2 million parcels per day before the holidays in December. Seen over the whole year, this represents an increase of +23 percent compared to the prior year. In addition, these volumes had to be managed under difficult conditions — for example, sometimes with fewer staff to ensure compliance with social distancing rules.

Even though three new regional parcel centers were opened in 2020 in Ostermundigen, Vétroz and Untervaz, our dependable infrastructure was still brought to its limits. In light of this, Swiss Post is planning to open more regional sorting centers by 2030 in Utzenstorf (Bern), Buchs (Aargau) and in the greater areas of Zurich and Basel.

Measurements at a glance 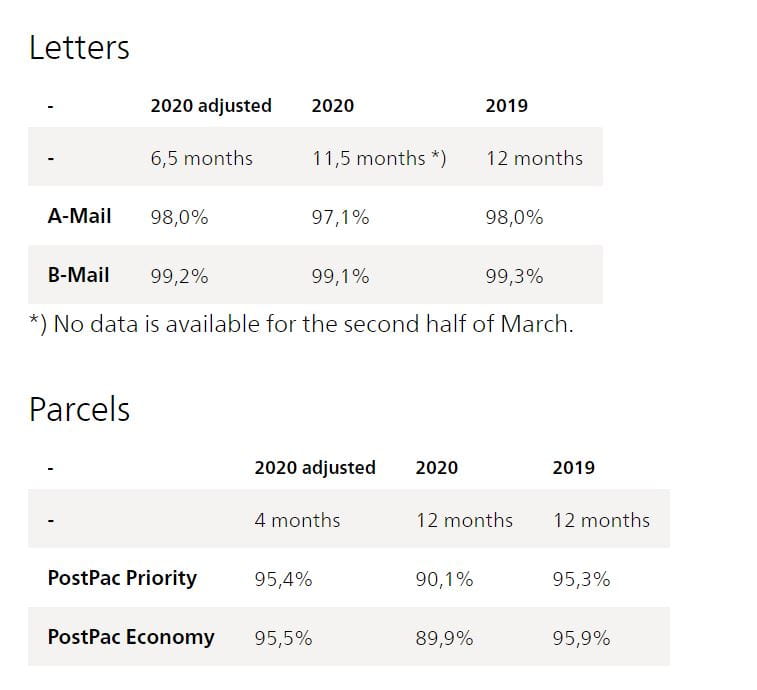