• Over €1.7bn saved cumulatively on fuel and electricity since 2008 • Alternative fuel and electric vehicles growing significantly year-on-year • Posts participating in the IPC Sustainability programme continue to increase carbon management efforts and save more than 15m tonnes of carbon emissions since 2008

Brussels, 09 November 2018 – The IPC sustainability report unveiled today shows that the twenty postal operators1 from five continents in the IPC sustainability programme achieved further improvements in all components of the programme. The IPC Environmental Measurement and Monitoring System (EMMS) remains one of the few, if not the only, service sector-wide initiative responding to the risks posed by climate change.

In 2008, EMMS participants set themselves two targets to reach collectively by 2020: to achieve a score of at least 90% in carbon management proficiency, and to reduce combined carbon emissions from own operations by 20%. After achieving the emissions target in 2014, a new intensity reduction target was set: to reduce total carbon emissions per letter mail and per parcel by 20% by 2025. This target focuses on delivery efficiency, and has also broadened the scope of the EMMS programme to include outsourced transport. It was approved by the Science Based Target (SBT) initiative.

Carbon Management Proficiency: still on track to reach target ahead of schedule 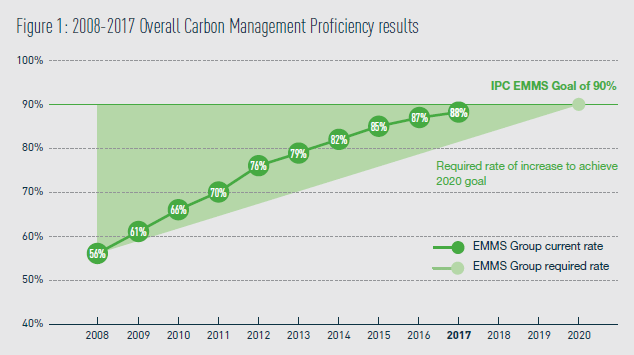 Holger Winklbauer, CEO of IPC says: “The participating posts have maintained momentum in their successes despite the challenging industry trends. Alongside the impressive collective achievements of the group, many posts stand out at the individual level. Ten posts have now surpassed the 90% target, up from seven in 2016, while a further six achieved overall scores of at least 80%.”

The improved carbon management also results in a continuous decrease of the group’s scope 1 and 2 emissions. These have gone down by 29.7% since 2008, from 8.83m tonnes to 6.21m tonnes. This equates to a total saving of more than 15.3m tonnes of carbon emissions over the period.

Winklbauer continued: “The EMMS programme also continues to show leadership in an ever-evolving global corporate sustainability landscape. In 2019 our programme will be expanded beyond carbon management to encompass broader sustainability goals. Following extensive engagement with both internal and external stakeholders, the following UN SDGs have been identified as those on which the postal sector can have the most positive impact: Climate action (Goal 13); Sustainable cities and communities (Goal 11); Responsible consumption and production (Goal 12); Decent work and economic growth (Goal 8); and Industry, innovation and infrastructure (Goal 9). The alignment of the sustainability programme with the UN SDGs not only responds to the expectations of our external stakeholders, but demonstrates the continuous evolution of our programme and the desire of our participants to have a positive influence on the most pressing global sustainability challenges.”

Fuel consumption and electricity use are the most significant contributors to the postal sector’s carbon emissions. A focus on reducing emissions associated with these activities not only has considerable environmental benefits but also presents opportunities for financial gain. Since 2008, the group has achieved an accumulated saving of 1.3m tonnes of carbon emissions from own transport. The 458m litres of fuel saved represent a financial saving of €466m (US$525m).

The group’s year-on-year electricity consumption fell by more than 2.2% between 2016 and 2017, demonstrating posts’ continued momentum in this area. Since the start of the programme, participants have collectively reduced their annual electricity consumption by 24%, from 9.95 TWh in 2008 to 7.60 TWh in 2017. This translates into an accumulated saving of 14.0 TWh over nine years, which, equates to €1,269m (US$1,430m) saved over the period.

EMMS participants’ alternative fuel vehicles fleet totalled 149,900 in 2017, up 45,800 vehicles compared to 2016 and representing 23.3% of total vehicles. Electric and E85 bioethanol vehicles now account for 48.7% and 28.3% of all alternative vehicles respectively, with the remainder made up of other alternative fuels including hybrid, CNG and LPG. The number of electric vehicles grew strongly in 2017 as two large posts significantly expanded their electric vehicle fleets.

Renewable electricity: key for reduction in emissions from electricity use in buildings

Participants are also switching to renewable sources of electricity, which in 2017 accounted for 30% of total electricity used in buildings, up from the 28% reported in 2016. While the share varies across the group, more than 80% of participants reported purchasing or generating some form of green electricity during the year. Eight participants have now made the impressive transition to using 100% renewable electricity.

IPC published the 2018 IPC Postal Sector Sustainability Report at the occasion of its Board meeting in Copenhagen, Denmark. The online version of the tenth annual Postal Sector Sustainability Report can be consulted here. It also includes 17 best practice cases showcasing particularly successful environmental initiatives taken by EMMS participants. For a full download of the report please click here.

About International Post Corporation
International Post Corporation (IPC) is the leading service provider of the global postal industry that provides leadership by driving service quality, interoperability and business-critical intelligence to support posts in defending existing business and expanding into new growth areas. It is a cooperative association of 23 member postal operators in Asia Pacific, Europe and North America. IPC’s solutions and services are used by over 180 posts worldwide. Since 1989 IPC has set standards for upgrading quality and service performance and developed technological solutions that help members enhance service for international letters, packets and parcels. IPC engages in industry research, creates business-critical intelligence, provides a range of platforms and programmes for member post CEOs and senior management to exchange best practices and discuss strategy. IPC also manages the system for incentive-based payments between postal operators.