Since 2010, Leo Burnett Thailand have organised a Cannes Predictions, an annual event at which they showed examples of great work from around the world. The intention was to help sharpen the creative judgement of both agency people and their clients. However, there was a decline in the number of clients attending the event, down from 250 in 2010 to fewer than 50 in 2013. The challenge was to get those brave marketers who accepted that creativity was changing to come to the show.

Top clients in Thailand were mailed an invitation, which was sealed within what looked like a lion's fang. This was not just a reference to the Cannes Lions marketing creativity festival but an allusion to the Thai saying, that to break a lion's fang meant to take a risk. Thus the fang was not just an invitation to those brave enough to attend the event but the inspiration to expect more provocative work from their agencies.

With 300 fangs mailed out, over 200 marketers attended the event. That was an increase in attendance of 150% against the 2013 Cannes Predictions event. Some of the clients who attended were high-profile marketers, who had never before come to the show. The lion's fang also caught the attention of many publications online and offline, generating a PR media value of 10 million baht (£200,000, €250,000). 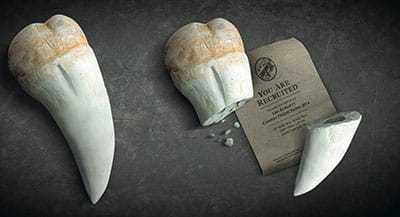