Most of us are not at home during the day – this was certainly the case before the Coronavirus pandemic. This leads to inefficiencies and extra costs when delivery providers knock on doors when nobody is home. One solution to this issue is to deliver to pick up points, also called PUDO (pick-up and drop-off). How do attitudes to pick-up points vary from country to country? And how do the network sizes of pick-up points differ? IPC looked into the pick-up point preferences of seven countries to bring you the insights.

, during a presentation at the Leaders in Logistics conference, the European PUDO network was estimated to consist of 190,000 pickup points.
As delivering to PUDOs saves time and money for the delivery operator, industry experts said that price incentives would be offered to use pickup instead of home delivery to make it more attractive.
IPC looked at key markets in the space of parcel pick up & drop off and the overview of the various points can be found below.

In this article, we include Parcel lockers, Post offices, Parcel/Courier shops in our definition of PUDO points. Of course, e-retailers with a physical presence (department stores, electric stores, etc.) very often have an in-store counter where online purchases can be picked up, but these delivery points are not analysed in this report.

In the Cross-Border E-Commerce Shopper Survey, online shoppers were asked which delivery locations they had used in the past year. The table below shows the results for the seven countries that are focused on in this article.

According to the 2019 IPC Cross-Border E-Commerce Shopper Survey, 34% of Australians used delivery to a post office in the past year, 5% used postal service point, 5% used a parcel locker station and 3% used courier’s parcel shop.

As of July 2020, Australia Post had approximately 5,000 PUDO locations across the country: including more than 4,300 post offices and over 400 parcel lockers. The nation-wide network is complemented by PUDO points from Hubbed (1,700 locations) Parcel Point (1,400 locations) and Amazon Hub (100 pick-up points), bringing the total to 8,000 points.

This number, however, is expected to increase significantly in the coming year due to Amazon’s entry into the Australian market and due to the various partnerships between local stores and couriers. This is done for two reasons: to reduce the number of failed deliveries and to give the busy consumer more delivery choice.

Australia Post, for example, has partnered with fulfilment technology provider Doddle to further extend its network of pick-up and drop-off locations. At launch in early 2020, the network of retail partners included selected IGA supermarkets, Priceline pharmacies and Aventus Group shopping centres. Customers will be able to select their most convenient location from a map offered in the checkout of the online retailer, with functionality powered by Doddle technology. Returning items will also be quicker and easier, with shoppers able to register returns online, which will generate a barcode for them to present in-store, without needing to print a label. Post Offices and retail partners scan the customer’s barcode and accept the parcel over the counter, for Australia Post to return.

Doddle described the partnership with Australia Post as “very important” for their business in Australia. Its technology platform helps retailers, too – including major multi-channel retail businesses by increasing competitiveness through more compelling delivery and returns propositions and generating more sales. On average, 58% of consumers collecting or returning orders in the stores of Doddle’s retail partners, go on to make additional purchases in-store.

In the 2019 Cross-Border E-Commerce Shopper Survey, 17% of Austrians reported using delivery to a post office in the past year, 15% used a parcel locker station, 12% used a courier’s parcel shop and 11% used postal service point.

Amazon launched its own deliveries in Vienna early in 2019. Since February 2019, local courier firms have delivered between 25,000 and 35,000 Amazon parcels daily in the capital from a delivery depot outside the city, according to Austrian media.

Amazon added a second delivery station in August 2020, further increasing their control over the last mile in the Vienna region.

Finnish postal group Posti has around 1,000 post offices and 100 parcel shops. Lately, the group has been investing in parcel lockers, a move driven primarily by a record-breaking e-commerce delivery orders, especially around the Christmas season.

As of May 2020, Posti currently has a network of about 1,600 parcel lockers. Posti plans to significantly expand its parcel locker network so that, by 2022, there will be 4,000 Posti parcel lockers in Finland.

Posti is not only expanding its parcel locker network, but also improving the underlying technology. This innovation is based on a new information system technology introduced in Posti's Turku sorting centre and transport terminals, which enables manual work to be digitalised. At the sorting stage, the system can tell whether locker space is available, and if necessary, direct the parcel straight to another pick-up point in the same area.

Posti is developing the usage type of its parcel locker network - on top of being a parcel delivery/return point, parcel lockers will be used for purposes such as recycling, consumer-to-consumer sales and delivering rental devices.

In the 2019 IPC Cross-Border E-Commerce Shopper Survey, 36% of French consumers reported using delivery to a courier’s parcel shop in the past year, 13% used post office and only a small percentage of respondents used parcel service point and parcel locker station (2% for each delivery method).

France has one of the most positive attitudes towards pick-up points in Europe. Almost half of French consumers state that pick-up points are their preferred delivery method and currently 20% of parcels in France are delivered to pick-up points.

The main pick-up point carrier in France is Pickup (part of DPDgroup, owned by French Post) with over 13,000 Pickup points (400 of which are parcel lockers). This PUDO network is also available to other couriers in France such as Colissimo and Chronopost. Pickup network continues to expand throughout the world, with over 50,000 parcel shops and self-service lockers as of November 2020. According to DPDgroup, 95% of the Europeans are located less than 15 minutes away from a Pickup point.

The second largest PUDO networks in France is called Point Relais which is operated by Mondial Relay group. Mondial Relay is one of the leaders in the distribution of e-commerce packages in France and Europe and supports more than 55,000 e-merchants, 9,000 of which are in France. Mondial Relay offers eBay sellers exclusive rates for access to its points when they integrate these pick-up points in the checkout.

Norwegian Post currently has a network of close to 1600 PUDO points, including over 1500 parcel/postal shops and a handful of post offices and parcel lockers. However, by the end of 2020, it will have around 1000 parcel lockers installed across the country, following a successful trial in Oslo with the locker provider SwipBox.

According to the 2019 IPC Cross-Border E-Commerce Shopper Survey, 17% of UK consumers used delivery to a post office in the past year, 8% used postal service point, 7% used a parcel locker station and 7% used courier’s parcel shop.

By far the largest single PUDO points operator in the UK is the Post Office with its over 11,600 points. These are actively used for delivery of packages from Royal Mail only.

Overall, the ratio of carrier-agnostic vs. carrier specific points is around 1:3 with only 3 providers providing a complete agnostic delivery experience for all couriers interested: CollectPlus, Doddle and Parcelly.

Following successful trials, Amazon Hub Counter has gone live in over 500 stores and will be rolled out in thousands of shops across the UK, combining online shopping with the convenience of accessing PayPoint’s wide network of retailers. PayPoint, which provides point-of-sale technology for independent retailers, including parcel services under the CollectPlus brand in about 7,000 retail outlets, has announced its participation in Amazon Hub Counter, a network of pick up points that allows customers to collect their Amazon orders in-store.

Amazon Hub Counter, available on tens of millions of items sold on Amazon.co.uk, gives customers the flexibility to pick up their parcels within 14 days from their chosen convenience store or high-street shop.

Paypoint recently announced a deal with DHL Parcel UK under which its network of independent retailers will also operate as DHL Servicepoint partners, enabling DHL customers to collect or send parcels at PayPoint outlets.

Its retail services platform, PayPoint One, is now live in over 14,000 stores in the UK and offers various services from parcels and contactless card payments to EPoS and bill payment services. The parcel service is available in about 7,000 stores under the CollectPlus brand, which is jointly owned by PayPoint and parcel carrier Yodel.

In the UK, there is already a very extensive PUDO coverage. 94% of the country’s population lives within 3 miles of 5 different PUDO points, and three quarters live within 1 mile of 5 options. The capacity is huge – and yet it’s massively underutilised – according to Doddle. In a conversation with IPC in June 2020, Doddle argued that “now is a crucial time where PUDO can bring a clear benefit to under-pressure retailers by delivering more parcels, more quickly”.

As deliveries of online shopping purchases add to traffic congestion and air pollution, the London-based Cross River Partnership created a portal called clickcollect.london where consumers can check what click & collect options there are around where they live or work. “Choosing to ‘click & collect’ when shopping online is a way to reduce the number of vans on London’s streets and clean the air” – the organisation’s website says. The following image is taken from clickcollect.london. 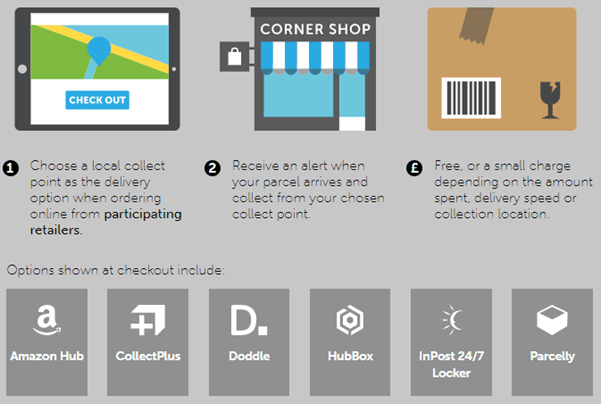 According to the 2019 IPC Cross-Border E-Commerce Shopper Survey, 11% of US consumers used delivery to a post office in the past year, 5% used postal service point, 5% used a parcel locker station and 4% used courier’s parcel shop. From the markets analysed, the US recorded the lowest percentage of people using the post office for parcel collection.

The USPS pick-up and drop-off network consists mainly of post offices, of which the postal operator has nearly 35,000 across the vast country. While these post offices are relied upon as sometimes the sole point of this type in smaller towns, they are in direct competition with a growing network of points from private carriers: UPS (around 5,000 points), Amazon Hub (about 10,000) and PUDOPoint Counters (around 3,500 points).

In June 2019, Amazon launched its Counter pick-up service in Rite Aid stores. Amazon said that the Counter service is now available at more than a hundred Rite Aid stores across the country, growing to over 1,500 by the end of 2019. In October 2019, Amazon unveiled three more retail partners for its expanding Counter package collection network. Customers now have access to thousands more Amazon Hub Counter locations with new store partners GNC, Health Mart and Stage Stores.

Over time, Amazon plans to expand the Counter network to thousands of other locations through additional partnerships with retailers, convenience stores and small businesses across the US.

Amazon said that it designed and built the technology for Counter from the ground up, resulting in a quick and simple package pickup experience for customers. Counter is part of the Amazon Hub family, which includes Locker, Locker+ and Apartment Locker, designed to bring the ultimate convenience to customers via pickup and return points. Locker is available in more than 900 cities and towns across the US. According to an analysis by Cnet, the Amazon locker network is close to 10,000 lockers.