Demand for online sales is growing worldwide, with all regions seeing sales grow more than 10% annually in recent years. However, online sales continue to account for less than a tenth of total retail sales in all but three countries according to the 2015 IPC Global Postal Industry Report. On average, e-Commerce sales accounted for 5.0% of total national retail sales in 2014, however, large variations exist between markets.

E-Commerce sales are forecast to grow rapidly in emerging economies over the next five years, at a CAGR of more than 20.0%, with India to record the strongest growth of just under 40%. Slower growth will be seen in advanced economies such as Canada, Germany, France, the UK and US, where e-Commerce will grow between 12-15%. Below we look at five markets, predictions regarding peak season volumes and key e-Commerce players’ preparations regarding extra staff, facilities and fleet.

According to e-Marketer, retail e-Commerce sales in Canada are projected to rise by nearly 17% to almost $30 billion this year. The fourth annual FedEx Express Canada Online Shopping Intentions Survey indicated that 77% of Canadians believe it is more convenient to shop for gifts online than in stores and plan to do almost half of their holiday shopping online in 2015.[1] More than 2,000 seasonal workers have been hired to complement the 49,000 delivery and processing employees of Canada Post.[2] Starting in November, the postal operator began delivering parcels on weekends in major urban centres.[3]

In France, La Poste’s B2C unit Colissimo was expecting to deliver up to two million parcels a day during the peak weeks leading to the holiday season, compared to its usual daily volumes of about one million parcels. It has added 400 more vehicles, giving it 900 vehicles for daily deliveries, and there will be extra Sunday morning deliveries in the largest cities on December 20. Its cut-off day for Christmas parcels is December 21. The group’s express operator Chronopost expects peak season volumes to rise about 12% to some 880,000 parcels during the final two weeks of December. It has activated six regional hubs to support its seven main national hubs, added a Lille – Montpellier flight, and has some 1,500 additional delivery rounds.[4]

DHL Express France is preparing for this year’s Christmas peak with more capacity, flights and additional delivery tours as it expects to handle 15% more parcels than at the same time last year, driven by strong B2C growth. From December 7 to 24, DHL Express expects to handle 30% more parcels than on average during the year, with a total of nearly three million parcels during the month and up to 200,000 parcels to be processed on peak days.

In the three weeks before Christmas, DHL Express France has hired 600 additional workers to cope with the increasing parcel volumes.[5] An extra 330 flights were planned to be introduced by the courier prior to the holiday period.[6]

Nearly 80% of German consumers will buy Christmas presents online this year and their average spend could rise by 34%[7]. DHL estimated it would deliver 8m packages during the peak period. Hermes estimated overall volumes to increase by 15% to about 36 million parcels for this year’s Christmas season.

Royal Mail estimates to deliver to 27 million homes and 2 million businesses across the UK during holiday period.[9] To support its capabilities, it planned to hire 19,000 temporary workers.[10] In November, Royal Mail opened 10 temporary parcel sort centres with around 3,000 seasonal workers.[11] It opened a total of 225 delivery offices on Sundays during December to offer more convenience to its customers picking up parcels.[12] Royal Mail’s fleet of over 47,000 vehicles was supplemented by 6,800 extra vehicles.[13]

Amazon UK planned to hire 19,000 people in seasonal roles within its fulfilment and customer service centres over the holiday period.[16]

In September, DPD opened Europe’s largest parcel sorting hub capable of sorting 720,000 parcels per night. It also opened four “super depots” each of which can handle 25,000 parcels a day.[17]

The United States Postal Service expects to deliver a total of approximately 15.5bn cards, letters, flats, and packages during the 2015 holiday season. In addition, approximately 600 million packages will be delivered between Thanksgiving and New Year’s Eve, which is an increase of 10.5% over the 2014 volume. From late November until Christmas, USPS will be delivering 7 days a week in major cities[18] The postal operator planned to hire 30,000 temporary workers to support their more than 600,000 employees over the holiday period.[19]

UPS expects to deliver more than 630m packages between Black Friday and New Year’s Eve, an increase of more than 10% over holiday deliveries in 2014. The company plans to deliver about 36m packages on Tuesday, Dec. 22, up from 35m last year, and double the normal daily average of 18m deliveries.[20] UPS planned to add up to 95,000 temporary workers during the holiday period.[21]

FedEx expects to move a record-breaking 317m shipments between Black Friday and Christmas Eve[22] FedEx planned to hire 55,000 people in seasonal positions. Most positions will be for package handlers and other support positions.[23]

In H2 of 2015, Amazon hired more than 25,000 full-time associates across the US and in October 2015 it announced creation of additional 100,000 seasonal positions within its US fulfilment and sortation centres.[24] 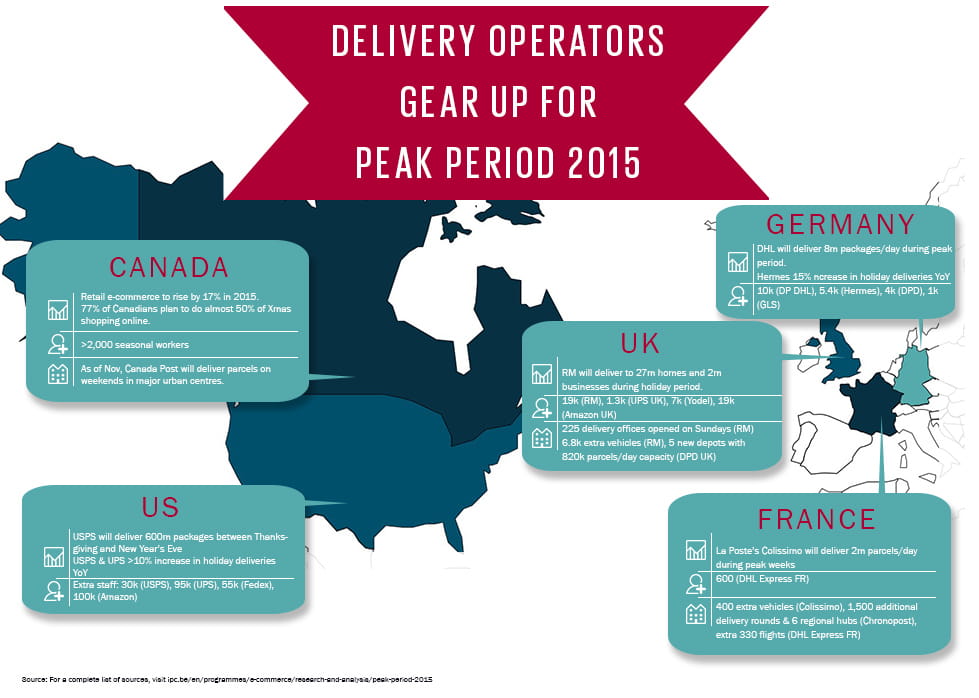