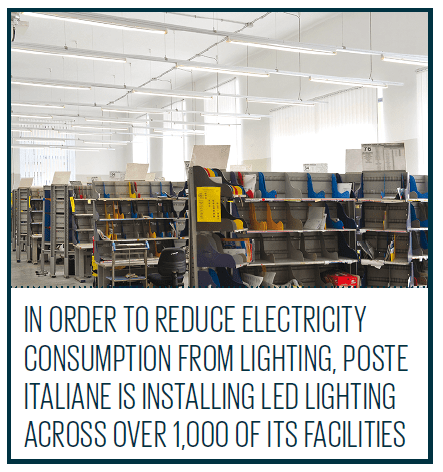 In May 2017, Poste Italiane implemented a project to replace fluorescent light fittings in over 1,000 of the post’s facilities with LED lighting technology. This on-going initiative aims to reduce electricity consumption from lighting at the post’s facilities by around 50%, as well as to substantially reduce energy costs.

This project originates from an internal energy diagnostic survey carried out in 2015, as per the requirements of Legislative Decree no. 102/14, under the European Directive EU 27/2012. The survey highlighted the considerable advantages of using LED lighting.

Another motivating factor was the reduction in the cost of LED lights, which has fallen by approximately 60% since the initial testing carried out by Poste Italiane in 2013. As a result, the company estimates that the return on the investment costs associated with this initiative will be less than four years.

The installation of LED lighting across Poste Italiane’s facilities is expected to yield annual energy savings of over 32 GWh, and a subsequent reduction in CO2 emissions of 11,000 tonnes per year.