An Post continues on its journey to a greener Ireland 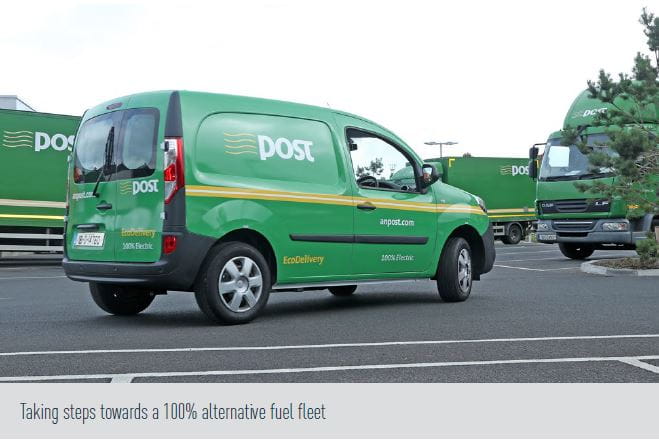 With the largest fleet in Ireland, it is not a simple task to go green, but An Post is well on its way to achieving exactly that with its plan to dramatically overhaul its delivery fleet. Starting with electric vehicles servicing the key commercial areas in Dublin, Ireland’s largest city, An Post is taking the first steps towards a 100% alternative fuel fleet.

As part of a trial in Dublin, An Post serviced every delivery point in a 9km2 area of the city’s business zone exclusively with an electric vehicle. Along with electric vehicles, power assisted tricycles were also used, and the trial provided an opportunity to test volume capacity, vehicle range and the recharging technology. The incredibly successful trial resulted in a 75% reduction in carbon emissions in the zone and has laid the groundwork for Ireland’s postal provider’s electric vehicle strategy.

Following on from the successful Dublin trial, An Post will widen their electric fleet to other cities, such as Cork and Galway. Any concerns relating to the availability of charging points and vehicle range have been dispelled during the trial, enabling an easier route to a fast-track nationwide roll-out.

Garrett Bridgeman, Managing Director of An Post Mails & Parcels explains: “An Post is investing €250,000 and saving 100 tonnes of CO2 in this initial phase of An Post’s Eco Plan. With a fleet of more than 2,500 vehicles, sustainability has always been a key concern for the business.”